Each year, EuroPUR, the European flexible polyurethane block makers’ trade body, commissions a report on the state of play in the sector from Angela Austin of Labyrinth Research & Markets. There were dramatic developments in 2017.

Flexible polyurethane foam production in Turkey was higher in 2017 than it was in Germany, Austria and Switzerland put together for the first time.

It is further evidence that the balance of the European flexible foam industry is moving from its traditional heartlands of the old EU. The numbers are striking.

‘Of this, about 1.3 MT was polyether slabstock. Around 82 kT was polyester last year. This is a surprisingly large amount,’ Angela Austin of Labyrinth Market Consultants told the EuroPUR 2018 meeting in Krakow, Poland.

She said that the spectacular growth in Turkey turned on three things. First, the country eliminated VAT on new domestic furniture and bedding; there was also a cut in VAT on office furniture to 8% in 2017. Those tax breaks drove the sale of new products.

Secondly, the country’s economy revived as normal business conditions returned to Turkey in 2017. This followed a year of political turmoil in 2016.

Finally, Turkey is well positioned geographically and culturally to benefit from growth in the Turkic countries to its east through the Turkic trade council.

Austin suggested that the amount of growth in the Germanic cluster was relatively low because of an increasing share of spring mattresses in the country. This led to a fall in the percentage of the German mattress market that is taken up by flexible polyurethane foam. 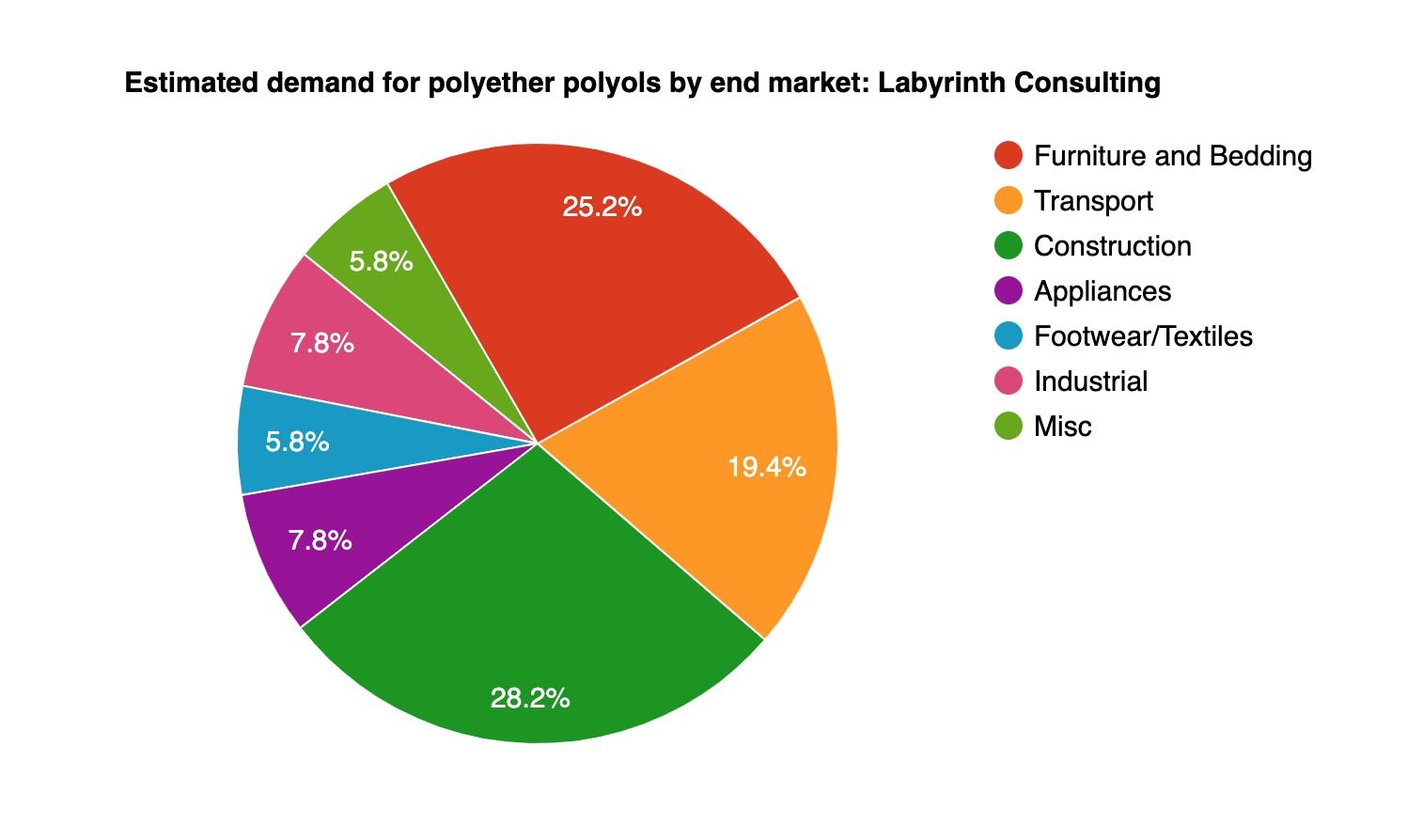 This is despite a large rise in the number of bed-in-a-box firms operating in Germany. Austin said that there are 25-30 companies active in bed-in-a-box businesses in Germany alone. ‘How long they will survive, we don’t know, but it is a major trend in the sector,’ she said.

Excitement over bed-in-a-box sales could not alter increasing pressure from imports and spring mattresses. 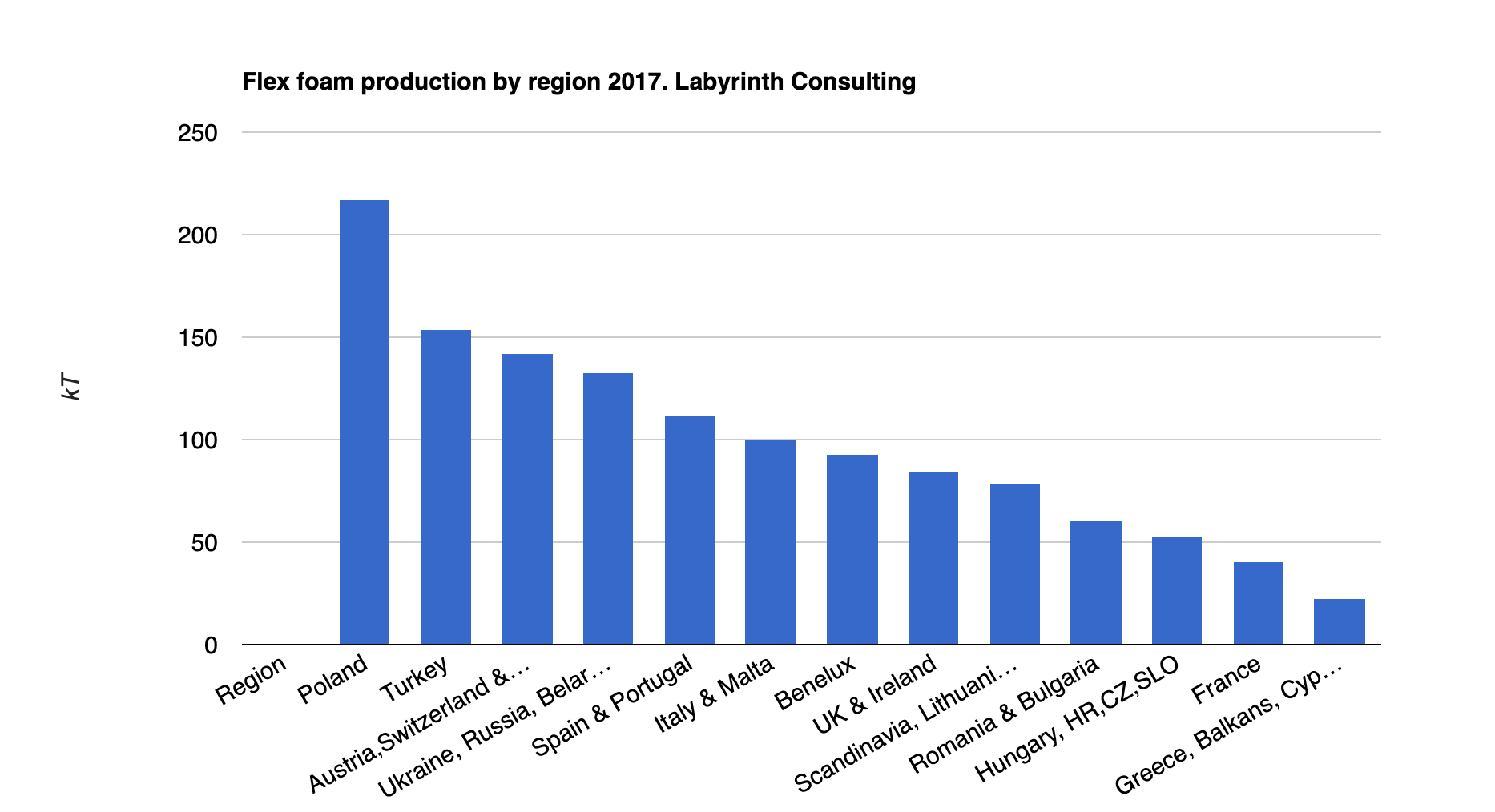 The Polish flexible PU foam industry grew in 2017 because of good domestic demand for finished products, Austin said. This is in addition to the fact that Poland continues to be the largest producer of furniture in Europe, and major global exporter.

Some Polish foamers have been expanding their portfolios and diversifying into specialty foams. ‘We are now going from a situation of just making large volumes of conventional foams in Poland,’ Austin said.

Their share has grown at around twice the rate of the three smallest regions in the Labyrinth report for EuroPUR.

The smallest regions are, in descending size: Central European cluster (Hungary, Croatia, the Czech Republic and Slovakia), France, and a Balkan cluster comprising Greece, the Balkans and Cyprus. In 2015, this trio produced around 93kT, and in 2017 117 kT, of flexible foam.

In percentage terms, the Romania and Bulgaria cluster was the next highest with 5.8%, and a 61 kT/year rise in production. This was driven in Romania by the presence of a number of large foamers, while in Bulgaria, the growing population and rising GDP are pushing the demand for mattresses and furniture. There were struggles with the high materials prices in 2017, Austin said, and the market there is buoyant

They were just ahead of Poland in percentage terms, which saw a 5.6% leap in production to 217 kT. 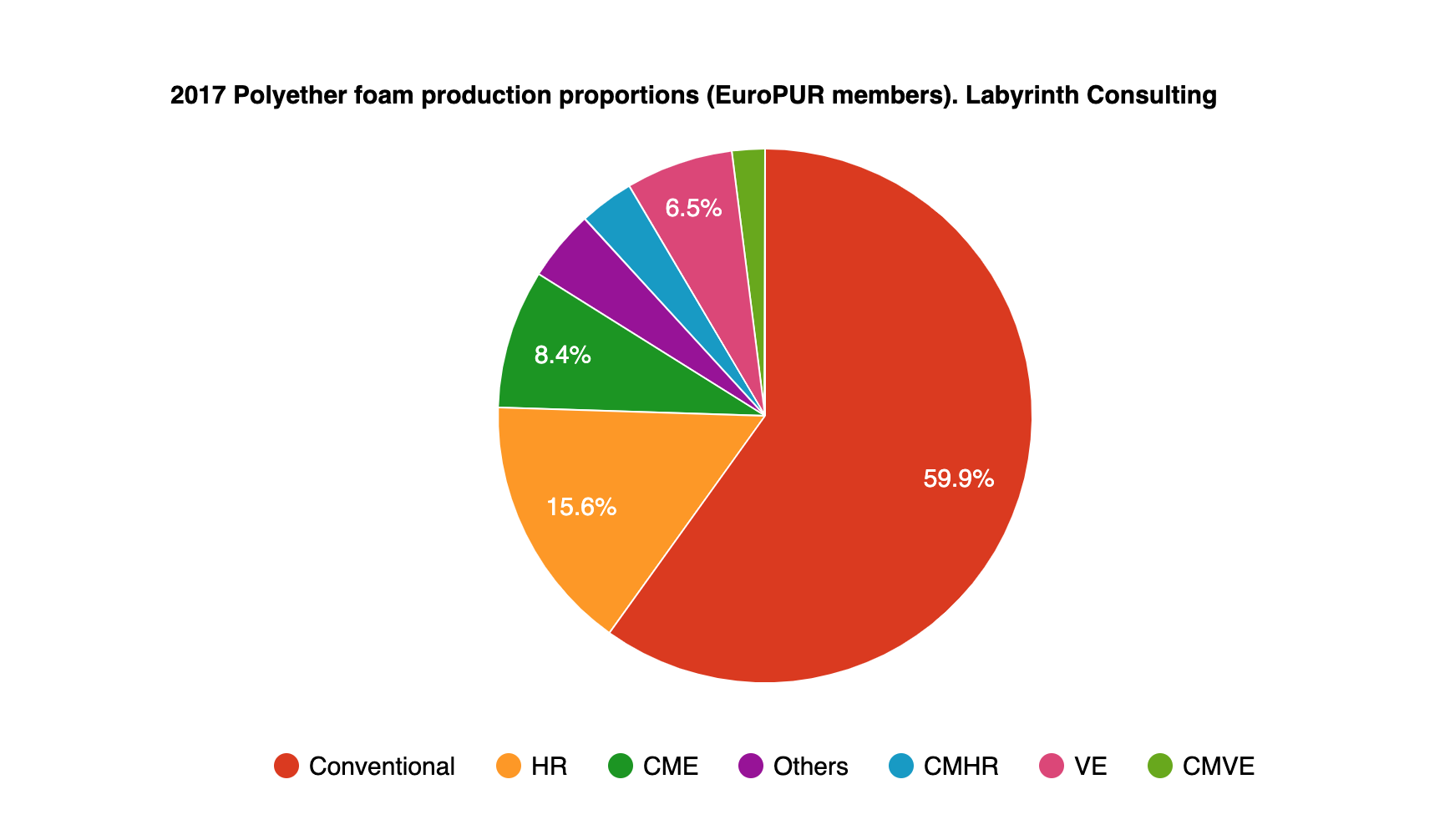 Growth in Scandinavia and the Baltic states were just ahead of the continent’s average growth rate, a t3.7%. This took production up there by 29kT to 79 kT for the year.

Production in Scandinavia, Estonia and Lithuania grew quite healthily at 3.7%. This was down to the East European countries continuing to expand their furniture sales in western Europe, and further afield to the east of their locations.

In the middle of the range, Spain and Portugal produced more in 2017 than in 2016, but were restricted by the availability of TDI and the price. This led one Spanish mattress maker to limit the number of new mattresses made exclusively from polyurethane in its 2018 collection. Out of 10 new models, only three would be all foam. The remainder would be a combination of foam and springs. Austin puts this down to the cost.

In Italy, foamers managed to produce 1.1% more than in 2016, on the back of a 1.4% increase in furniture production, said Austin. However, the foamers were reported to be producing much lower quality foam at lower density. This, they fear, will be less durable and may undo the good work that the APIF association has done in a campaign to promote polyurethane in Italy as a great material for the furniture and upholstery industry.

The move to lower density foam was driven by the Italian furniture industry trying to contain costs.

The biggest loser in 2017 was the cluster containing Greece, Balkans and Cyprus. These countries not only experienced the largest drop in percentage terms, down 19.2% from 2017 to 2017, but they also saw the largest drop in absolute terms. In this cluster, production at 23 kT in 2017 was down 5kT on the 2016 amount. ‘They have really struggled with the availability of TDI and prices,’ said Austin. Overall, production fell by 19% for the foamers in this region. However, it was still twice as high as it had been in 2015.

Production in France fell by 3.3% to 41kT, the second largest fall in both percentage and absolute terms. Production in the cluster containing Hungary, the Czech Republic, Slovakia and Croatia was almost unchanged between the two years. Foam production in this Central European grouping fell by 95 T or 0.2% between 2016 and 2017.

This growth in production occurred in the teeth of high and sustained materials price rises on the continent. These high raw material prices had a big effect on the rate of innovation in the European polyurethane industry.

As demand for MDI grew at the foamers, Austin said there was an increase in speciality polyols, polyols that offer greater hardness or performance characteristics than one might expect from the isocyanate part of the foam. ‘Foamers have been using polyols with different OH numbers so that they can use less TDI,’ she added.

‘People have been trying to use less TDI because of price. MDI use has increased by between 4-5%, partly because of a growth in MDI-polyester polyol foam production. TDI polyester foam uses less TDI [than conventional polyether formulations] but if you use MDI-polyester systems, then you don’t use TDI at all.’

Austin illustrated how hard the competitive environment in Europe can be for foamers. As a mattress producer said: ‘We cannot pass on price increases to the retailers in the current competitive environment. We spend so much time dealing with price increases and how to introduce alternatives, there is little chance to look at innovation and market development.’ This is the reality of producing flexible polyurethane foam in Europe in 2017.