Emery Oleochemicals has introduced Emerox renewable and Infigreen recycled polyols as part of its range of eco-friendly polyols for flexible polyurethanes. These have potential applications in the automotive sector where OEMs areÂ increasinglyÂ demanding green alternatives to conventional materials.

In this paper, the performance characteristics of Emerox and Infigreen polyols are demonstrated as a partial drop-in replacement for conventional polyether polyols in resilient TDI-based flexible polyurethane foams. The impacts of Emerox and Infigreen polyols are evaluated on the foaming reaction profiles and on the key physical properties of free-rise and moulded high resilient polyurethane foams.

Emery Oleochemicals started working on ozonolysis of fatty acids, with commercial implementation in the 1960â€™s. Emerox polyols can be produced from several types of natural oils to yield bio-polyols with the possibility of a high level of polyol structure customization and improved consistency over existing natural oil polyols (NOPs). This should enable higher incorporation levels in polyurethane applications.

Automotive consumers are increasingly expecting their cars to be greener, and these renewable or recycled polyurethane foams give benefits in areas of comfort, safety and protection and energy conservation.

Translating these benefits to consumers with better gas mileage and comfort; demand for polyurethane flexible foams alone is set to rise by a compound annual growth rate of 12.2%. This is estimated to generate revenue of $1.1 billion by 2018 for the industry and is the fastest growing applications for green and bio-polyols.

Emerox polyols are renewable NOPs. NOPs, are derived from triglycerides like vegetable oils or natural fats. Except for castor oil, all other natural oils have to be chemically modified to introduce hydroxyl groups to enable them to be used as polyols.

There are several hydroxylation processes available for fatty acids, and most of these processes involve the oxidation of the C=C double bond. However, depending on the source of oil used and inconsistencies in the oils, the properties on NOPs can vastly vary.

Emery Oleochemicalsâ€™ process includes ozonolysis of natural oils to produce mono- and di- aliphatic carboxylic acids, which are separated according to their composition. These are then esterified to produce Emerox polyols. This technology enables polyols with a broad range of hydroxyl numbers; with well controlled functionality and molecular structure. Emerox 14001 and Emerox 14055 grades are designed for use in flexible foams.

Infigreen polyols are produced from scrap polyurethane foam using a proprietary two-stage process that uses chemolysis to depolymerize the foam and is followed by second proprietary step which reduces polydispersity and gives polyol with desired EquivalentÂ  Weight.

Infigreen polyols have been developed with a range of range of hydroxyl numbers for products including flexible and rigid foam. The viscosity of InfiGreen polyols is comparable to the conventional polyols. Emery Oleochemicals has developed Infigreen 300, Infigreen 100, and Infigreen 60 polyols for flexible polyurethane foams.

Raw materials, grades and suppliers are shown in Table 1.

Preparation and testing of flexible foams In all cases 10% of model polyol was replaced by 10% of Emerox or Infigreen as straight substitution. No other changes were made to the formulation. All flexible foams were hand mixed with a laboratory high-torque mixer. For free-rise foams, polyol and isocyanate were mixed for 5 seconds, then transferred into a rectangular box, before cream time was reached. The foaming profile, including cream time, gel time, and rise time, was measured on all free-rise foams. After the rise time, the foams were immediately placed in an air-circulating oven preheated at 75Â°C for 30 minutes to complete the cure. Molded foams were made into blocks 30x30x5cm. The thoroughly mixed polyol and isocyanate were transferred to an aluminium mould preheated at 75Â°C before the cream time. After 210s in the mould at 75Â°C, foams were demoulded and crushed. After at least 24 hours of additional cure at room conditions, the foams were cut and tested. A list of test methods used in evaluation of the foams is shown in Table 2. Â  Â  Results and discussion I.Â  Emerox and Infigreen polyols â€“ 10 percent polyol replacement Foam density Foams prepared with 10% of Emerox and 10% Infigreen exhibited similar or higher foam density compare to the reference foam for free-rise foams (see below). 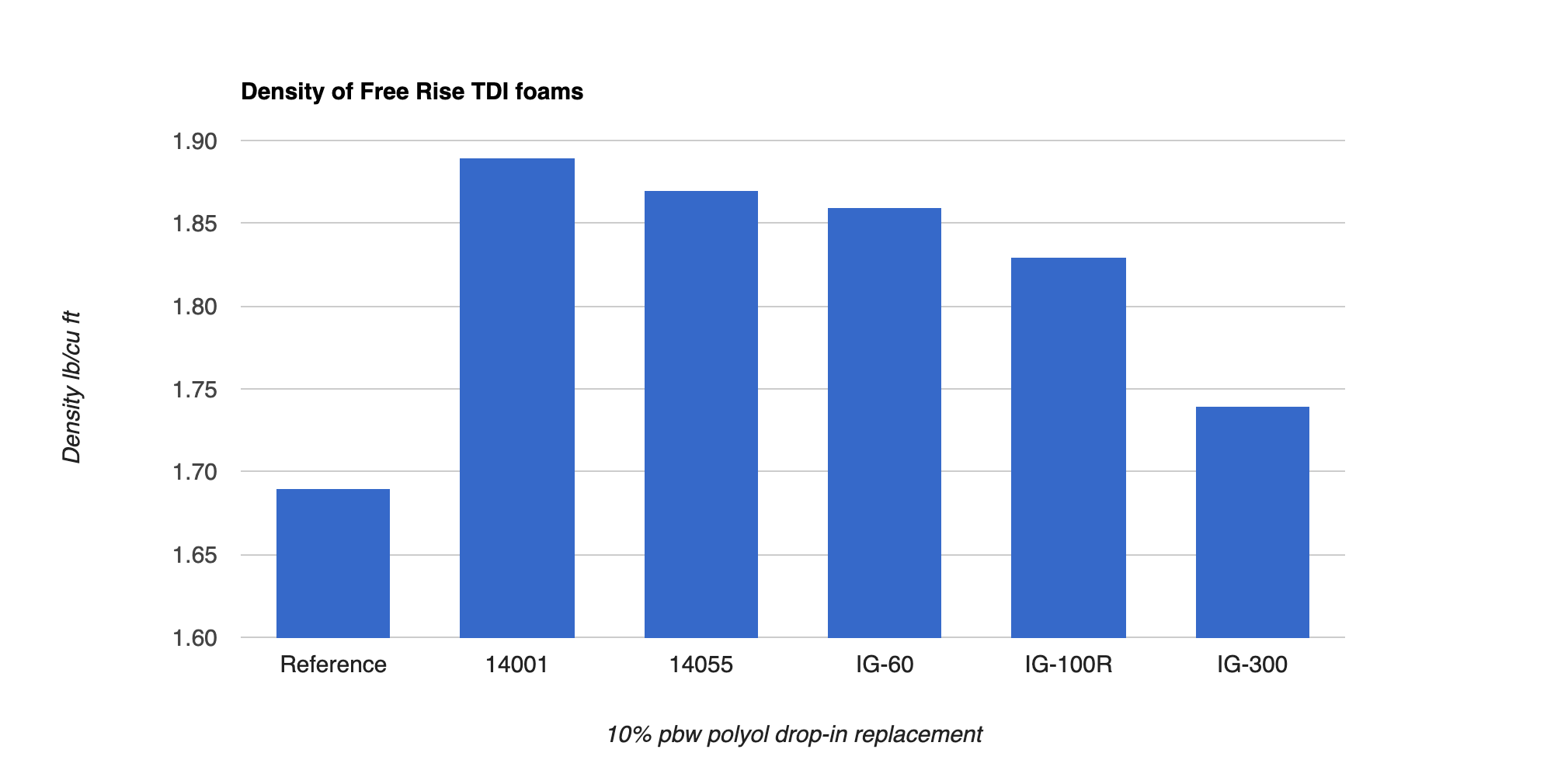 Resilience The foams prepared with 10% of Emerox or Infigreen polyols showed resilience higher than 50%, which is comparable to the reference foam. However, free-rise formulations containing Emerox 14055 and Infigreen 100 and moulded foam containing Infigreen 300 gave resilience just below 50% (see below). 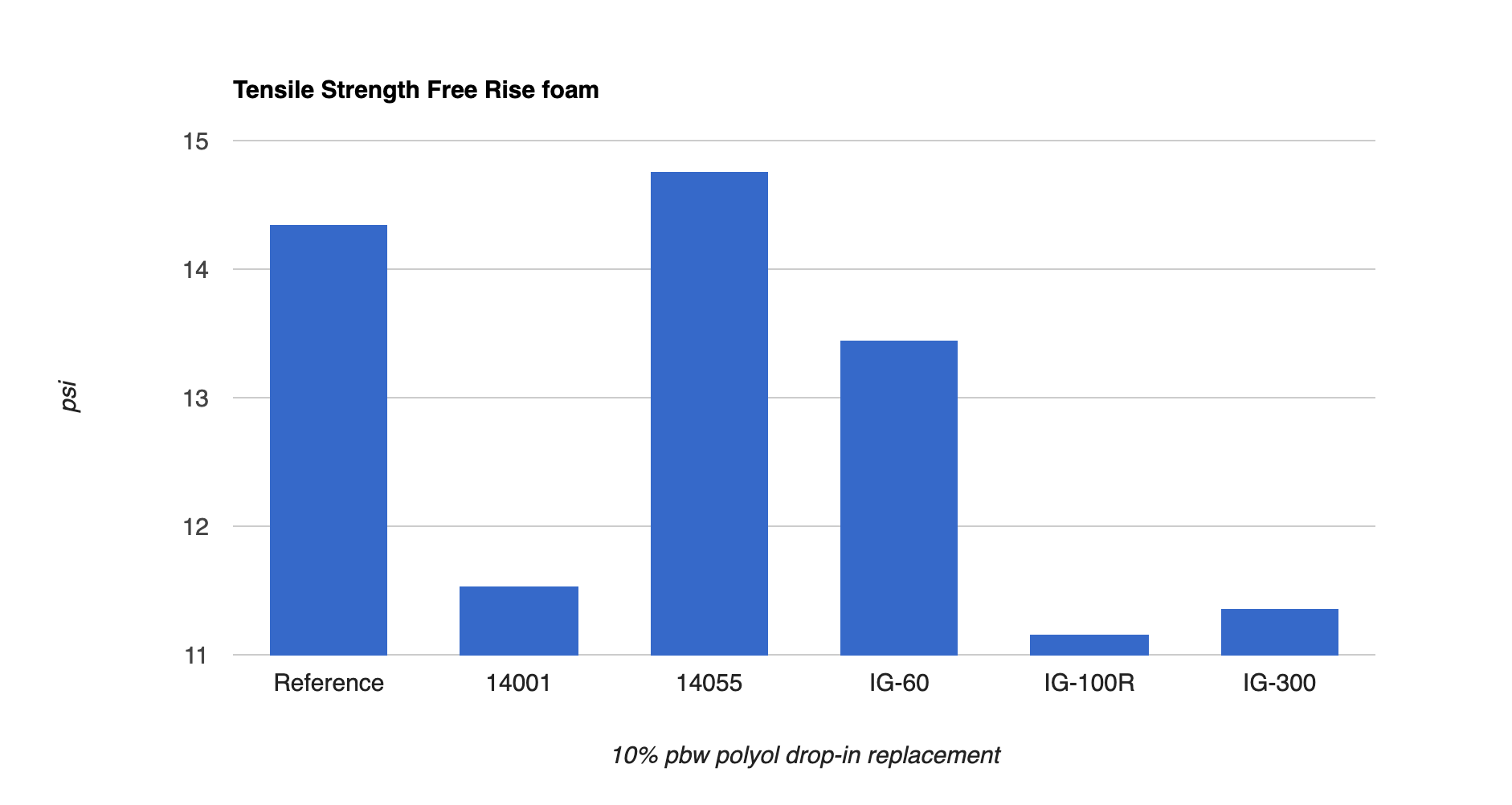 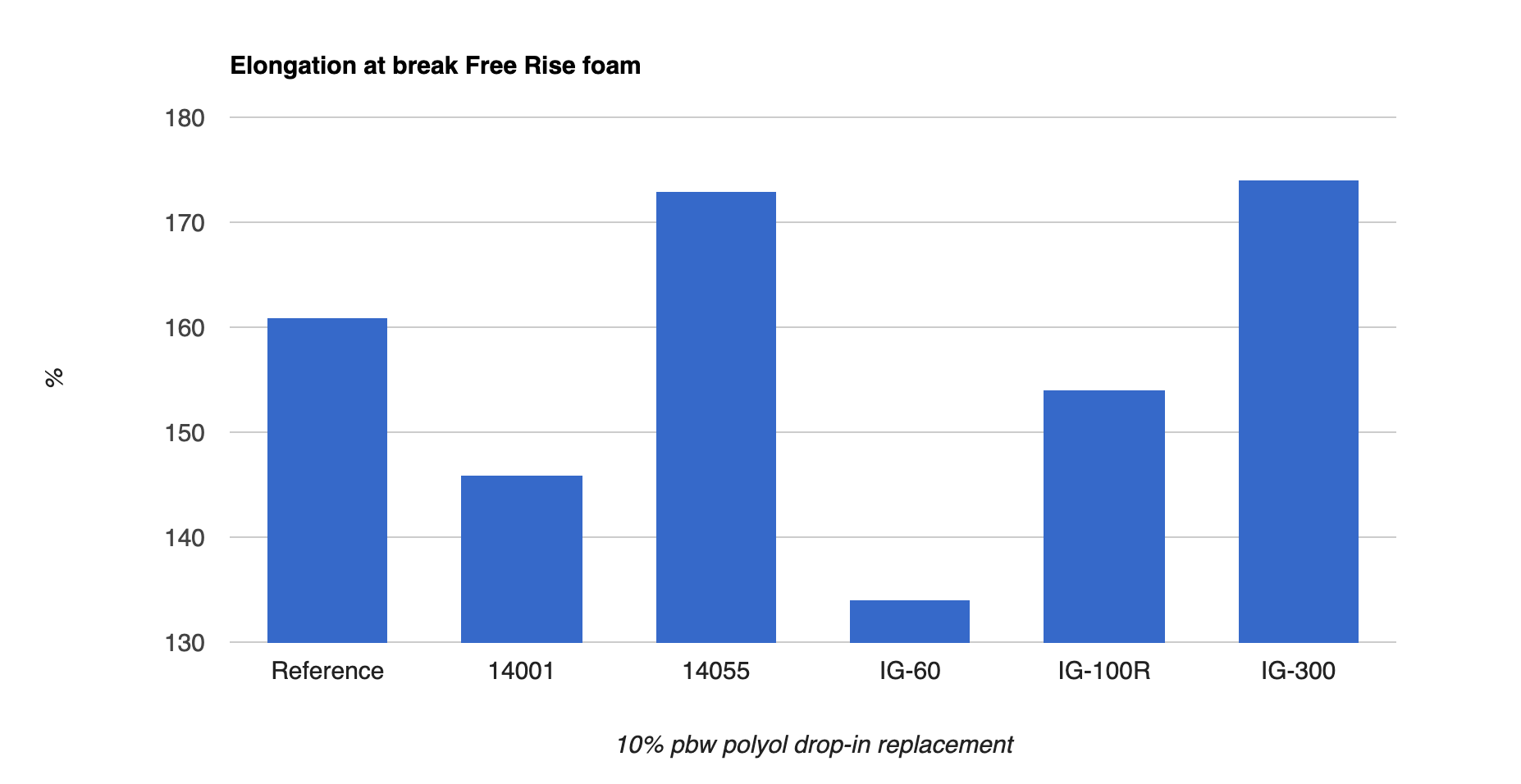 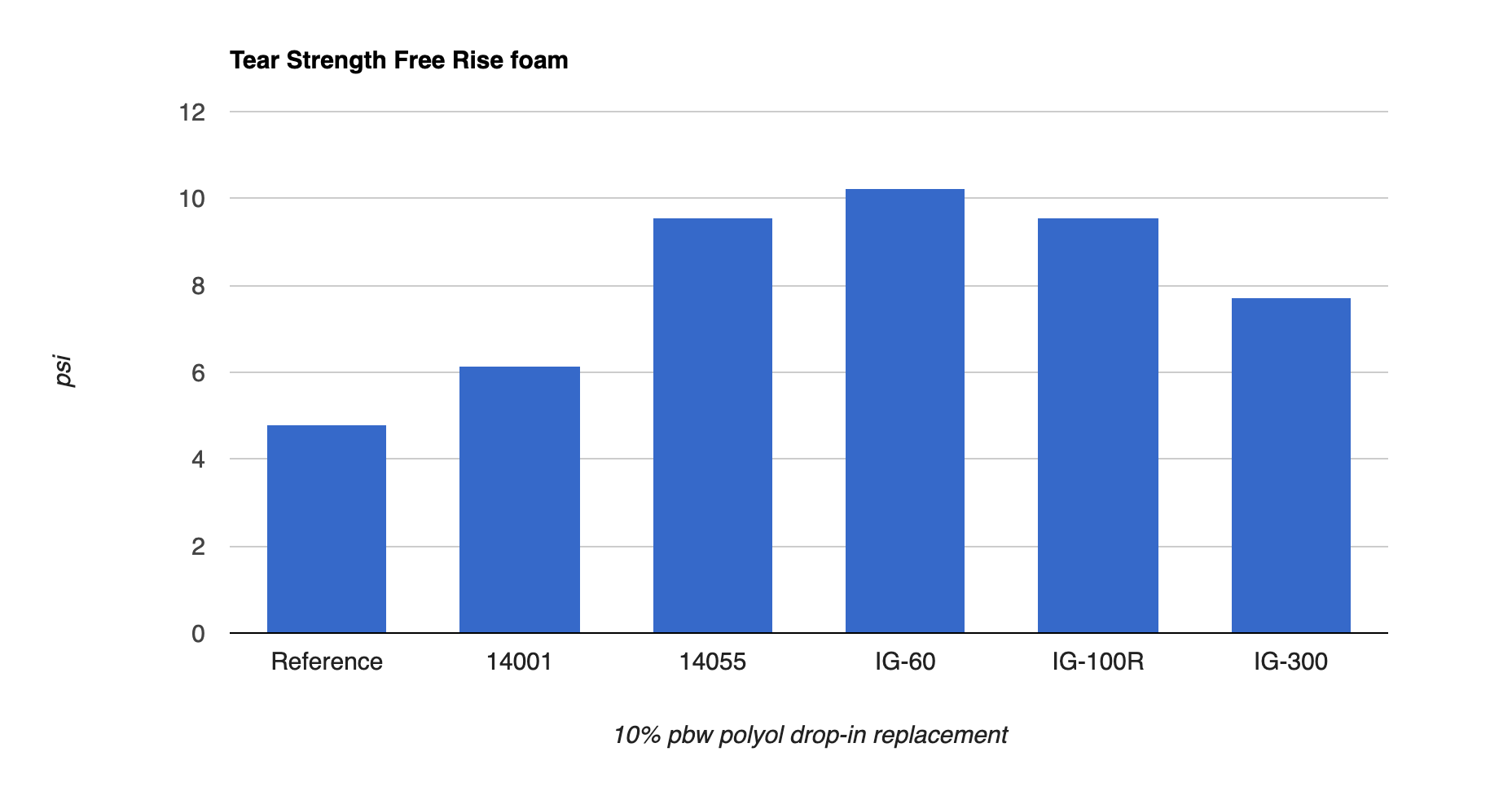 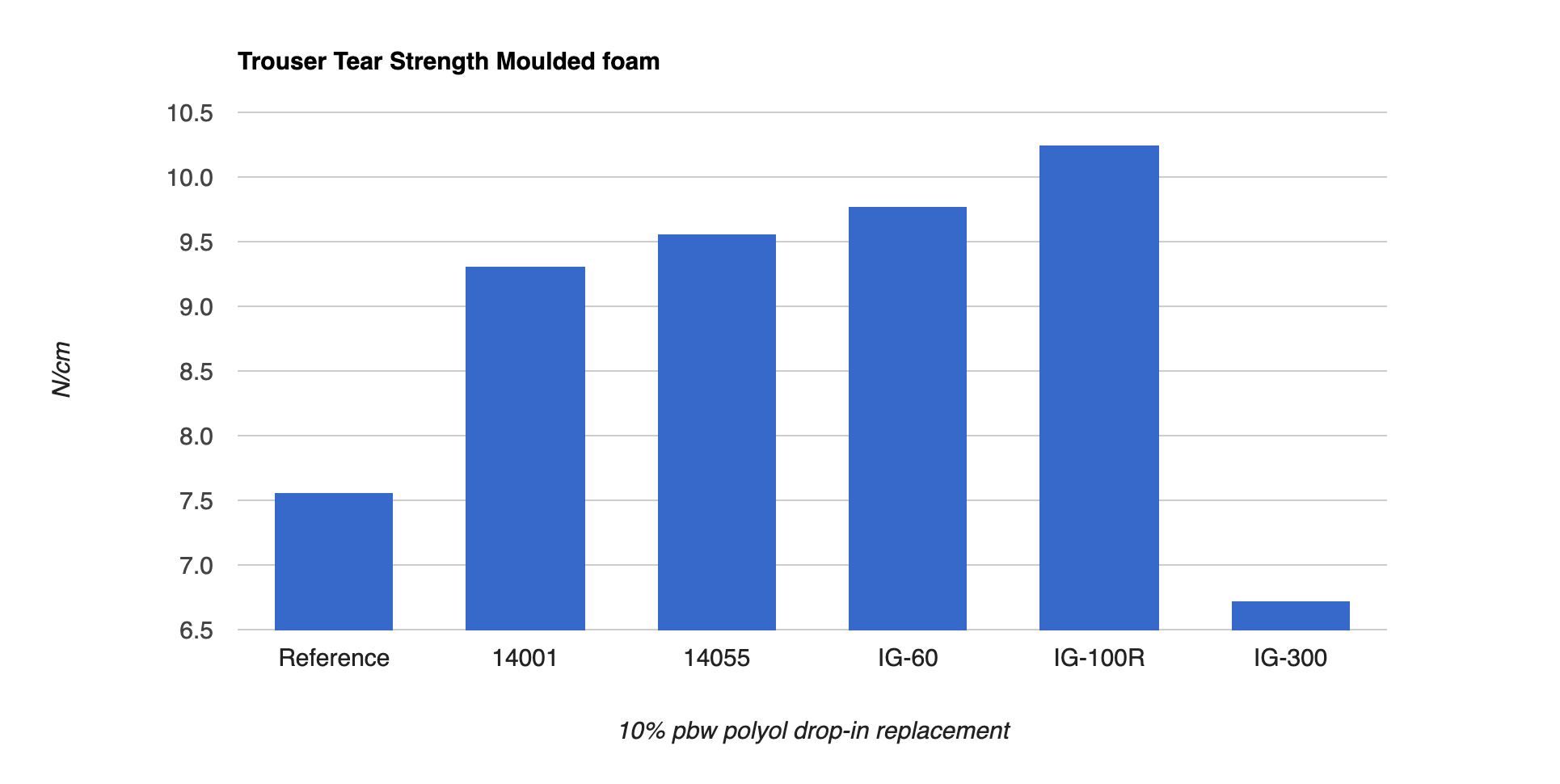 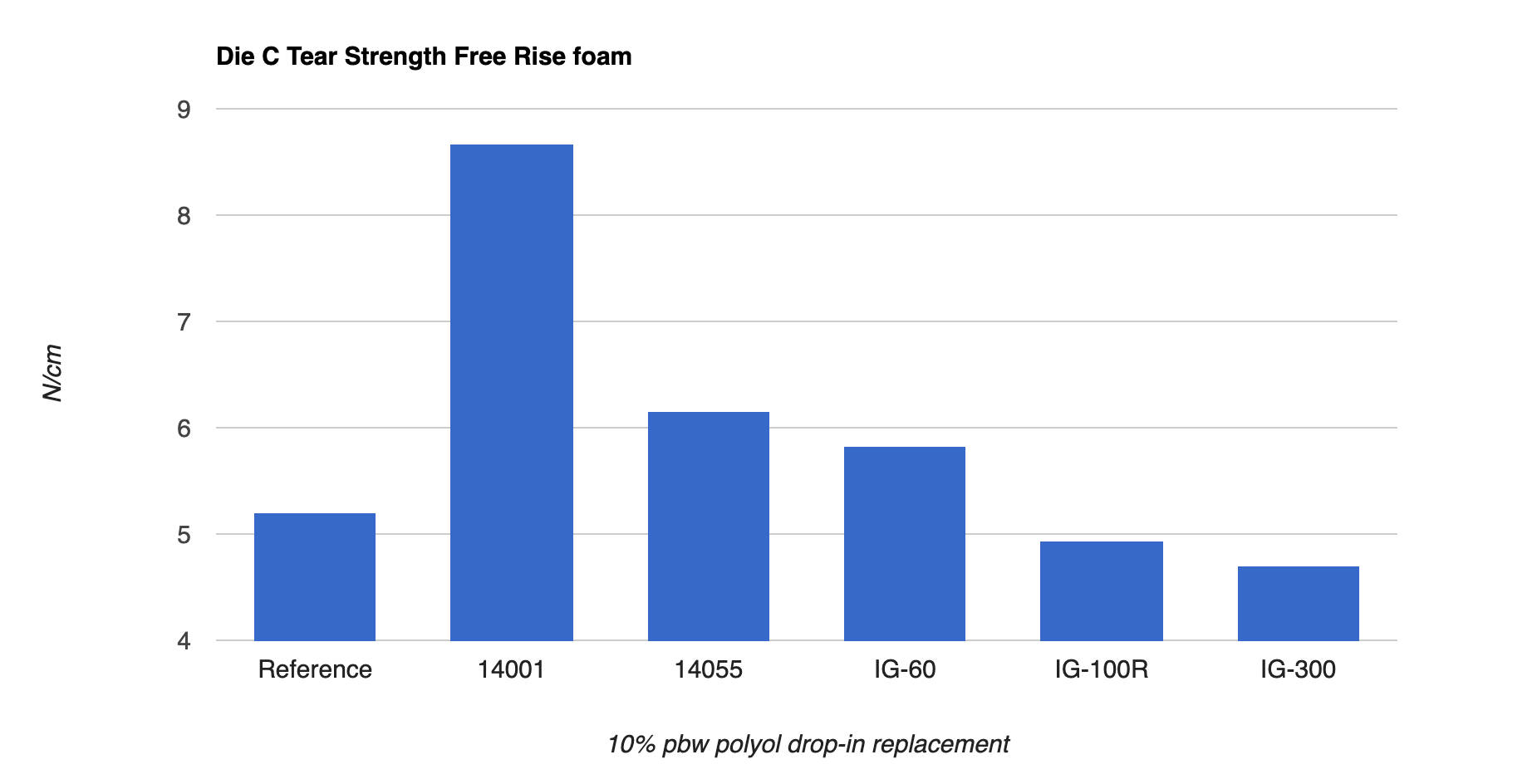 Constant Force Deflection (CFD) In free-rise CFD increased with the degree of Emerox 14001 substitution. In moulded foams CFD remained fairly unchanged with the addition of Emerox 14001. Initial data clearly shows that Emerox 14001 and 14055 and Infigreen 60, 100 and 300 polyols, at 10%% substitution, were suitable for high resilience foam applications. Overall, the foams prepared from these polyols exhibited comparable properties as the model reference foams for both free rise and moulded foam applications. In cases where the from the addition of Infigreen or Emerox polyols were negative, it is believed that adjustments to the foam formulations could be made to overcome these deficiencies as no other adjustments to the foam formulation were made in this study. The data for Emerox 14001 demonstrates that this polyol can be used in TDI resilient foam formulation at reasonable high loading. The addition of Emerox 14001 did not significantly affect the foaming reaction profile, and stable free rise foams were produced with up to 50% drop in substitution rate. It was determined that the addition of Emerox 14001 improved the overall tensile properties and tear strength of moulded TDI foams. In moulded TDI foams, addition of Emerox 14001 at up to 30% substitution rate did not affect the dry and wet compression sets. As is the case with most NOPs, the drop in addition of Emerox 14001 did result in reduction in resilience and increase in hysteresis, but it is expected that these properties can be improved with formulation adjustments. Authors Michael Brooks, Ashley Maloney, Steve Turner, Jeff Barnhorst, Bryan King and Ibrahim Sendijarevic Emery Oleochemicals, 4900 Este avenue, Cincinnati, Ohio Acknowledgements We would like to thank Vahid Sendijarevic and his team at Troy Polymers for their guidance and assistance with foaming experiments and data collection. About Emery Oleochemicals With revenue of US $1billion (2013), the company is headquartered in Malaysia with manufacturing plants spanning three continents - Asia pacific, North America, and Europe. Emery Oleochemicalsâ€™ global operations are backed by a diverse workforce and an extensive distribution network covering over 50 countries worldwide. Â  Â
Recommended for You