One of the highlights of the EuroPUR annual meeting is the market review of the European flexible polyurethane foam market. This year Angela Austin took us through the numbers as Simon Robinson reports.

Sales of the European flexible foam industry grew by 5.2% in 2015, Angela Austin of Labyrinth a Research & Markets told delegates to the 2016 EuroPUR annual meeting in Brussels in June.

This year, Austin broadened the scope of her report with “data on the Russian Federation, Turkey and some Eastern European members. Data is collected from EuroPUR members and others connected with the industry,” she told delegates.

“With regards to TDI globally the relationship between supply and demand was much looser in 2015 than previous years and in some cases prices fell by as much as 40% during 2015. According to industry reports five of the seven producers in China stopped production for several months in 2015 to try to stabilise the situation, without much success.

“Despite this situation, the Chinese Polyurethane Industry Association has set a target of 1.5 MT/year capacity by 2020,” Austin warned. She added that this will increase production “substantially.”

“In the Americas, demand has been stable and there’s not much new capacity expected in the next few years and in Europe we saw TDI capacity going in last year,” Austin said.

“MDI manufacturers have fared a little better and markets have been closer in supply and demand. But by the end of 2016, markets could get tougher again as the Dow Chemical/Saudi Aramco joint venture, Sadara comes on stream with diisocyanates and polyols aimed at the Middle East and African markets and also potentially Europe.”

She added: “In terms of polyols global demand has been more balanced. Production has been managed, but the price has remained depressed.”

Global supply continues to grow with larger plants being constructed, Dow has set up a 200 kT/year plant in Thailand which is running quite well; Shell chemicals has also made a decision to rebuild the Moerdjik plant. Shell also announced a 600 kT/year expansion in polyether and speciality polyols in China. In India “there is going to be a bit more capacity from Manali,” Austin told delegates. “That’s going to supply the Indian market and local markets such as Turkey and the Middle East,” she added.

Total polyether slabstock production for the EU, Norway and Switzerland was just over 885 kT in 2015, polyester slabstock production was around 72 kT. This was produced by a total of 143 plants, with 126 in the EU 28. One French producer stopped last year, and a Mediterranean producer stopped producing, “but I also found one in Scandinavia,” said Austin.

The standout figure is Italian growth, up 45% last year, due to increased output of the Fiat Chrysler Jeep Renegade and Fiat 500 X

“Nobody expected a 9% growth in car sales in 2015,” Austin said, “The standout figure is Italian growth, up 45% last year, this is due to increased output of the Fiat Chrysler Jeep Renegade and Fiat 500 X, which are being produced for export. Turkey is still performing strongly in making cars for its neighbours.”

Returning to the flexible foam business, she said: “The number of full-time employees increased by 2.5% according to figures from EuroPUR members reporting their overall employment. Most added one or two employees and a few had added maybe 10”. The industry is employing more people than last year. And the total turnover increased by 2.6% to nearly €3.4 bn,” Austin said.

In 2015 production of polyether slabstock was 858.5 kT for the EU 28; Turning to important countries on the fringes of Europe, Austin said that Turkey had produced 113 kT, Russia around 90 kT polyether foam in 2015, and the Ukraine, Serbia and Kazakhstan a further 22.9 kT between them in the year. This takes the total amount of flexible polyester foam to 227 kT from these countries. 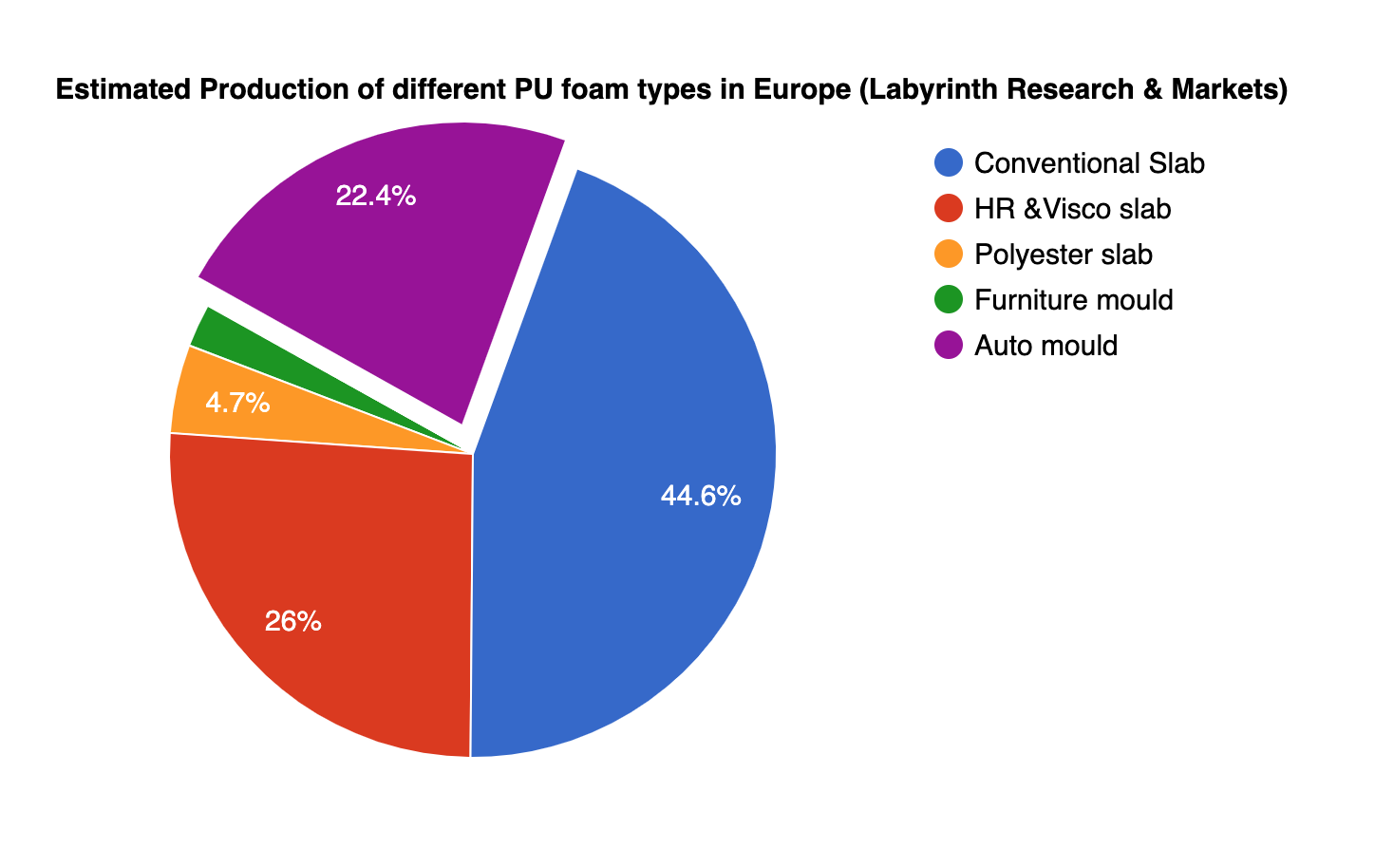 In West and Central Europe, Germany remained the largest accounting for about 15% of total production in that region. “Production in France declined very slightly as French foamers are suffering from weak domestic demand and external pressure from producers in Eastern Europe and also Iberia,” she said.

Austin continued that northern Europe produced 148 kT with strong growth. Production in the UK and Ireland was up 3.8%, production also grew in the Scandinavian nations with Denmark doing “quite well. Production in the Baltic states remained more or less stable,” she said.

The South Eastern European area in the EuroPUR statistics is dominated by Poland “which produced 170 kT of foam in 2015.” This makes it “by far the largest producer of slabstock foam. And that’s going to get larger over the next 12 to 18 months with more capacity going into that country,” she said.

Production in southern Europe continued the four year run of declines, Austin said. She continued: “Italy seems to have hit the bottom with just under 100 kT of production in 2015. Portugal continues to grow quite strongly reaching up to 60 kT because of strong growth in furniture production there. Some Spanish foamers have reported positive growth.”

Another industry trend which Austin noted was “Chinese investment into Europe and the US. It looks like they are trying to shorten the supply chain,” she said, adding: “There is a plant going into Serbia funded by money from China. The Chinese market, as you know has had difficult times, so that they are looking to develop markets by producing in the region where their markets are.”

Pressure from far away

“There is a continuing trend towards backward integration, with furniture and mattresses manufacturers who traditionally bought from the foamers now making their own foam,” Austin added.

Transport technology is also having an impact on the European industry in more established countries, she said.

Companies are increasingly transporting compressed foam blocks. This brings the economic radius for shipping by road from 350 km to around 1500 km, she added.

“That’s having an impact on the reach of firms in Eastern Europe because they can now import material into the middle of Europe,” she said.

From Norway to the world