The European flexible polyurethane foam market has shown steady demand growth, according to figures produced by EuroPUR at its 2015 annual meeting in Frankfurt in early June 2015.

There are signs that consumer confidence is starting to return to the continent, EuroPUR said, as demand for upholstered furniture is positive for the first time since 2007. In other good news for the industry, PU mattresses have maintained a 42% share of seven major European markets.

Top line figures from the association show that slabstock production has grown at an average annual rate of 3.1% between 2010 and 2014. Over the same period, the figures show that moulded foam production has kept pace with automotive demand and grown at between 4% and 5% in 2014.

Angela Austin, of Labyrinth Research & Markets, presenting data for EuroPUR said: “There was about 1.2m tonnes of flexible foam made in this region last year.”

Austin pointed out a number of trends affecting the industry: “There’s definitely an interest in more renewable sources, recycled polyols and natural products. Companies are looking at recycling their own production scrap into polyols.

“There’s the growing use of MDI in viscoelastic foams. There may be some opportunities to revisit TDI for automotive seating to create low-density foams which would contribute to light weighting of car seats.

Austin went on to discuss the three largest end-use sectors for flexible polyurethane foam in Europe: bedding, furniture and automotive.

Figures from the European Bedding Industry Association (EBIA) shows that the European mattress market increased in value by 0.8% to the end of June 2014. This is despite a small decrease in volume (-1.7%) compared with 2013. The price increase was greater than inflation in Austria, Belgium, Spain, Germany, the Netherlands, France and Italy.

According to figures from the EBIA, the largest mattress producing nation in the EU was Poland in 2014. That country made 9.08m mattresses, followed by Germany (5.63m), Italy (5.12m), the combined UK and Ireland produced 3.85m mattresses. France made 3.8m. 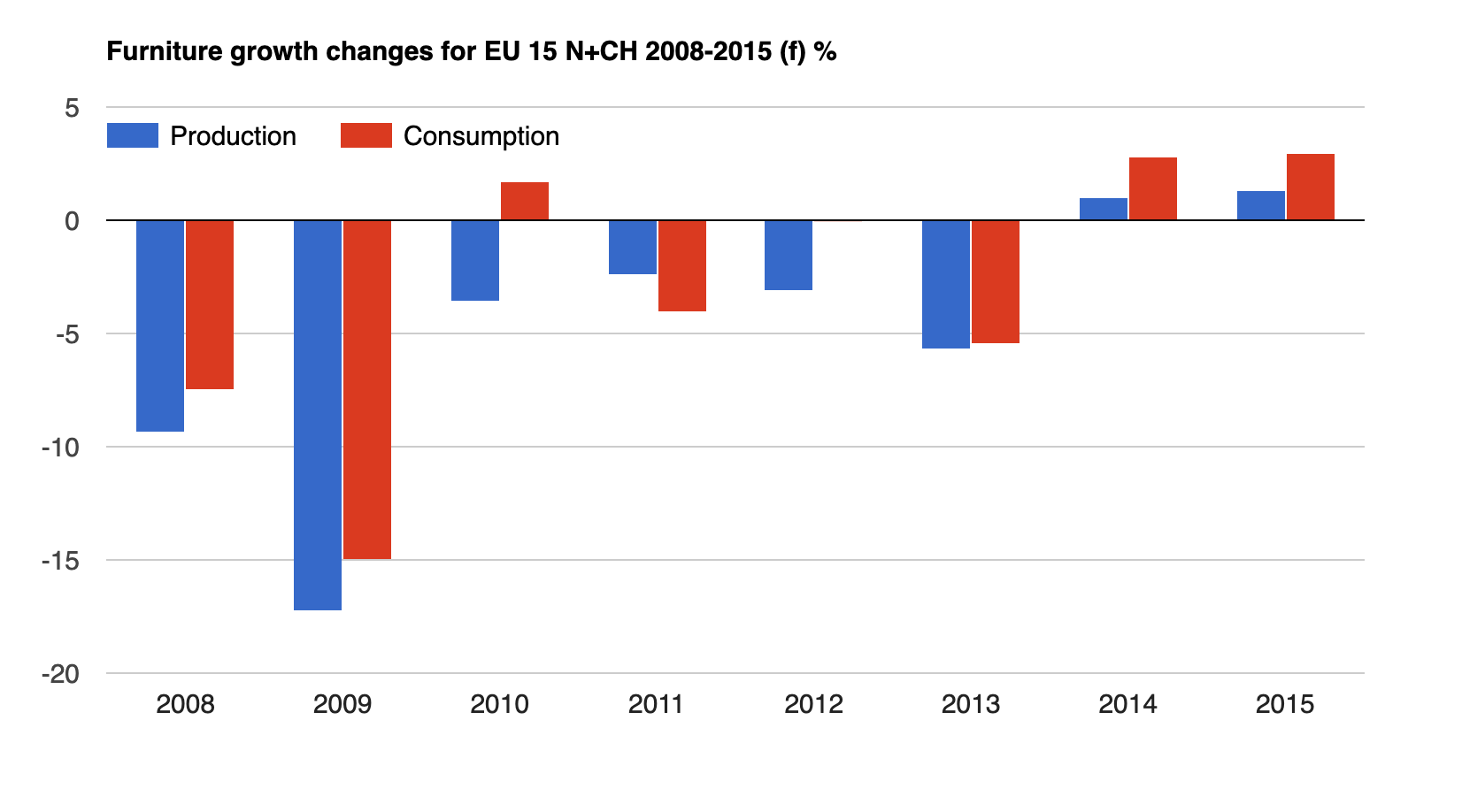 “The average price of a mattress in Europe has increased to EUR130, which is more than the rate of inflation,” Austin said.

“2014 was the first year we have seen positive growth in both production and demand for furniture within the Eurozone countries. EU 15 production grew by 1.8% whereas demand grew by 1.6%. That shows growing consumer confidence,” said Austin.

“The EU 13 members also posted strong growth. Poland is now the largest producer and exporter of foam within this region,” she added.

“Overall there’s been some positive news with growth in production. At the same time prices are being pushed down. There’s also been more downward pressure caused by on-line shopping, and still we’re facing low-cost imports coming into the area,” Austin said.

There are markets in the centre of Europe which are facing a two-way squeeze from Poland and Portugal, Romania, in terms of finished product imports and compressed foam imports.

“Ikea ceo Peter Agnefjall has warned that ‘the challenging situation may not be over’,” Austin said.

While business is hard in some geographies there are opportunities in Northern Europe, Austin added.

“In Northern Europe, there’s been increased demand for bespoke furniture. This kind of furniture can’t be delivered in containers en masse. People choose the fabric and the foam and have it delivered to their house in six to eight weeks. There has been some growth in this sector in the UK and Ireland. There have been some exports to Eurasian countries.

There are opportunities in acoustic damping. Europe’s increasingly elderly population is “a challenge, but as we get older we need more comfortable mattresses and seats,” Austin added. 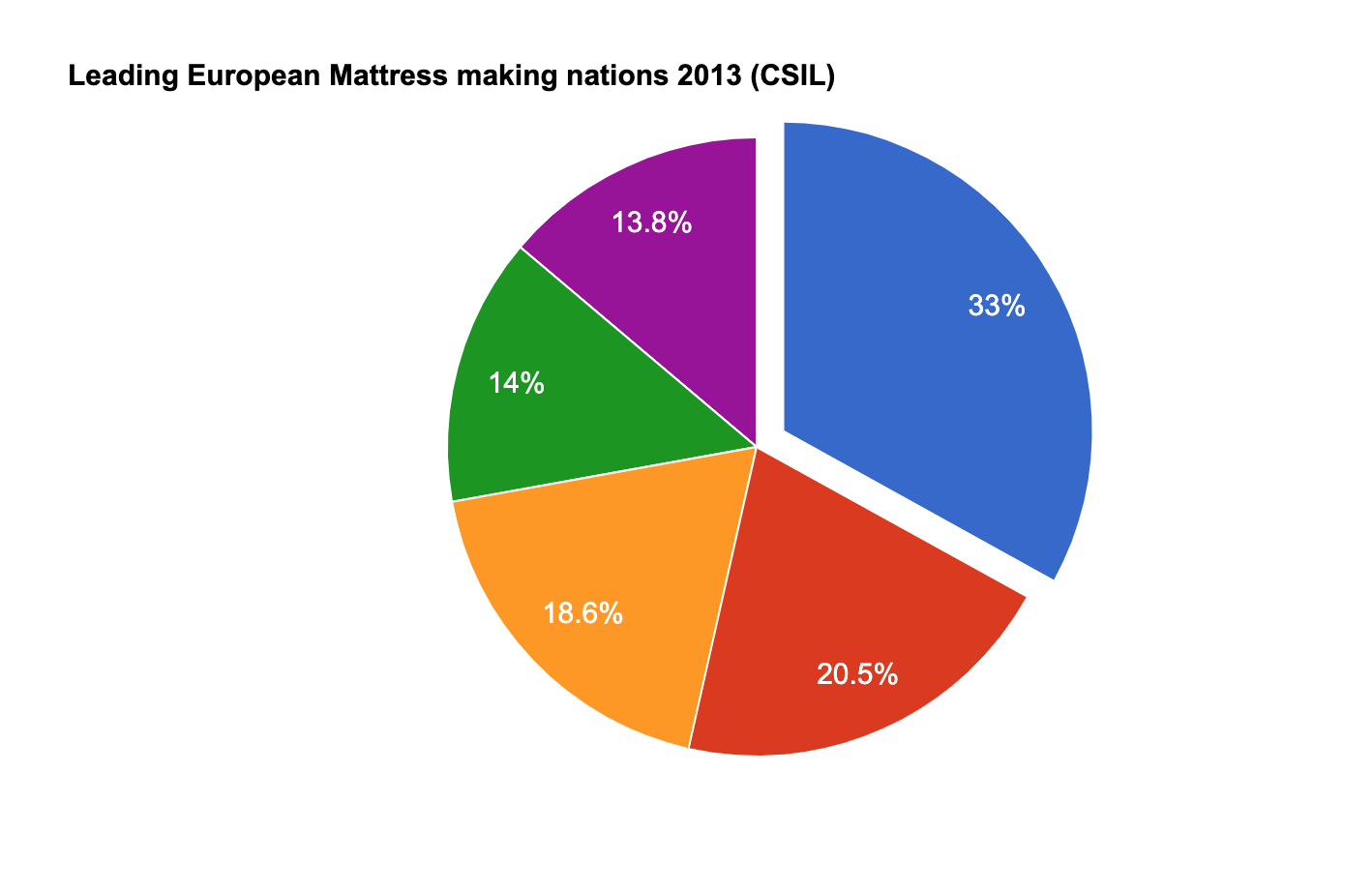 Vehicle production grew fastest between 2013 and 2014 in Hungary - by 38.2%, with Spanish production increasing 8.9% and the Czech Republic up 8.7%, according to ACEA and IHSAutomotive. Data presented at the meeting showed that between 2015 and 2019 automotive production would grow fastest in Poland, by about 11.4% and was expected to shrink by 10% in Italy over the same time. Total automotive production growth was likely to be around 1.4% on average each year across Europe and would reach around 18.45m vehicles.

In 2014 Europe was the second largest producer of vehicles after China, and Germany accounts for about a third of Europe’s production. In 2014, the US was the main recipient of European automotive exports at 983,000 vehicles, closely followed by China.

EuroPUR presented its European market data summary of 2014 at the event.

The association estimates that in 2014 there were 825,084 tonnes of polyether slabstock produced in the EU 28 plus Switzerland and Norway. Over the same period 66,973 tonnes of polyester slabstock were produced across the region. This gives an annual total of 893,057 tonnes.

There were 107 continuous foaming plants in operation in the grouping which turned over an estimated EUR3.36 bn ($3.7bn) turnover employing 15,600 people in full time equivalent jobs.

EuroPUR counted 57 of the foam plants as belonging to member companies and estimates that its members produce 60% of the foam in the EU 28 plus Switzerland and Norway.

Austen said: “The number of employees includes people who work at foam plants converting foam into shapes but not at companies which buy foam for conversion.

She said: "In West and central Europe, Germany is the dominant supplier, producing 42% of production 100kT.”

“Production in France seems to decline on a pretty steady basis, 4%/year. This has been mainly due to poor consumer demand and spending, higher import penetration of lower cost goods and foams, both from the West of Europe and the East of Europe. France in particular has suffered a squeeze from Portugal and Poland of low-cost goods,” Austen said.

Northern Europe has growth has been “extremely strong with the UK and Ireland performing particularly well, growing at 4%/year over the past couple of years and showing good recovery from recession. The Baltic States have seen the most pronounced growth at around 9.3%/year between 2010 and 2014.

Poland is the largest producer of slabstock foam in the region, producing just over 161kT/year. “That’s going to grow further as more production lines go in and start up.”

Bulgaria is small but showing signs of growth. Romania has three companies based there. “Some of these companies are squeezing the market in Italy and France with their low cost production,” Austin told the conference.

Austin continued: “Southern Europe has seen production decline in Italy now less than 1000,000 falling 5-6%/year over the past 2-3 years. This is due to imports from Asia and the loss of export market in the US for leather sofas.”

“Similarly,” she said: “Spain has suffered from growing imports of furniture and foam from Portugal. In Portugal they’ve made the best of EU funding, they’ve invested in new and efficient plants. And they’ve benefited from cost-competitive transport.

“A lot of trucks go from East to West in Europe and are by the time they get to Portugal they are empty, and because they have to go back East, they have very competitive transportation costs.”

Austin continued: “There are now major foam and furniture manufacturers in Portugal. It’s really grown incredibly. Spain and Portugal now account for 46% of the total of 86kT/year.