Despite raw materials difficulties the European, the flexible foam market grew by more than 12.5% in 2016, as delegates at this year’s EuroPUR meeting found out. Simon Robinson reports.

One of the highlights of the EuroPUR meeting, held this year in Milan, Italy, is the market data provided by Angela Austin of Labyrinth Research and Markets.

The bottom line of this year’s presentation was that the use of flexible polyurethane foam grew in the continent between 2015 and 2016, despite market allocation of raw materials.

According to figures presented by Austin, the EU 28 nations increased their trade surplus in polyurethane foams by 33% in volume terms in 2016 compared with 2015. This equated to a net surplus of EUR 125.5m.

The large increase in exports could have be driven by market tightness for TDI and MDI in regions such as Africa and the Middle East. In those regions, it has been hard to secure supplies of the key diisocyanates. European producers have been able to retain supplies, albeit at sustained high prices. 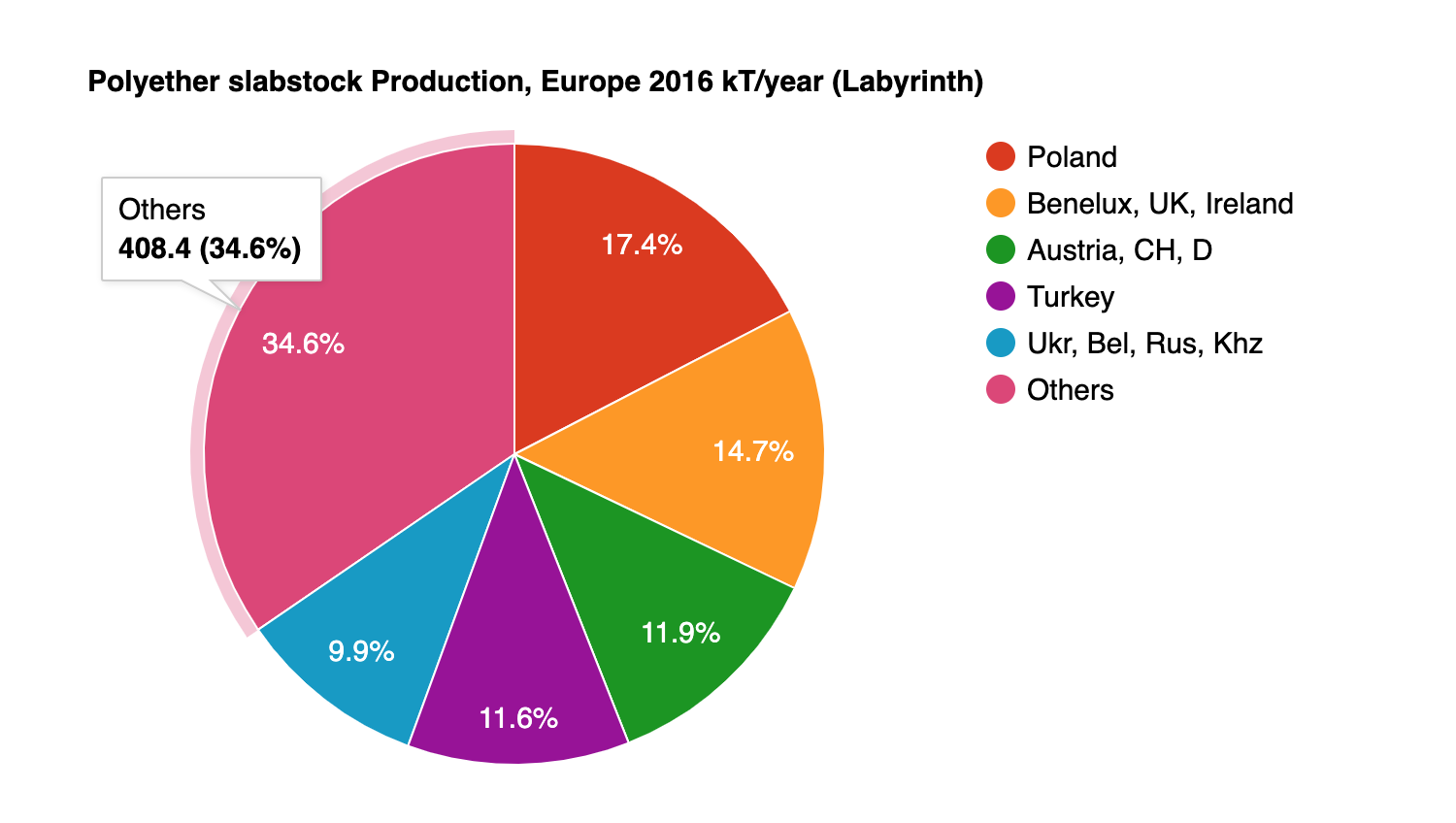 Austin explained, ‘The TDI shortage has led to a disconnect between the toluene price and TDI. Material has been diverted to Europe from Africa and the Middle East, which have been badly affected with high prices and materials shortages. Luckily, European foamers have been able to keep supplies coming.’

The tight supply situation led to a price spike and, Austin claimed, 2016 was a year to remember. ‘Making isocyanates is technically complex, and when a large plant goes offline, it is noticeable in the market,’ she said.

‘The search for alternatives has started,’ Austin added. ‘There has been an increase in re-bond manufacture for mattress cores and furniture.’

While that may be the case, there were significant increases in volume in capacity for polyether slabstock in Poland.

Production grew in this region from 170 kT/year in 2015 to 206 kT/year in 2016, a rise of 20%. Polish production is now around 31 kT/year more than the second largest region, UK, Benelux and Ireland, according to Austin’s figures.

The production share of the five largest European regions fell slightly in 2016 to 773.4 kT/year or 62.2% of the 1,243 kT/year produced across the continent.

The regions were unchanged between 2015 and 2016 and were: Poland; Benelux, UK, Ireland; Austria, Switzerland and Germany; Turkey, and finally; Ukraine, Russia, Belarus and Kazakhstan. See graph A.

Away from the five largest regions, Austin said that if outliers such as the Balkans, where the growth in 2016 was 155%, are ignored, the overall national average growth rate in the EU was ‘around 12%’

Austin urged some caution, however. ‘The data have been collected in terms of tonnes not cubic metres, so manufacturers may have switched to making higher density foam by using more blowing agent. This allows them to pass stiffer tests, and [the foams] are more suitable for compression,’ she warned.

She added that compression equipment is becoming more common in the industry, and that more people are buying compression equipment and shipping their foam considerable distances. ‘Growth,’ she said, ‘seems to have come from the mattress industry. This is because people increasingly value a good night’s sleep. Millennials are spending more on mattresses and refugees are also having an impact on demand particularly in Turkey.’

Austin added that the Belgian foam industry has increased production and UK firms have benefited from some new start-ups such as Eve Sleep, which are ’buying blocks of foam and converting them into mattresses for the growing bed-in-a-box market.’

This sector is growing strongly across the continent. ‘The 25- to 35-year old age range are well informed, and they like this kind of product,’ Austin said. It is, she added, beginning to have an impact on the French and German markets. 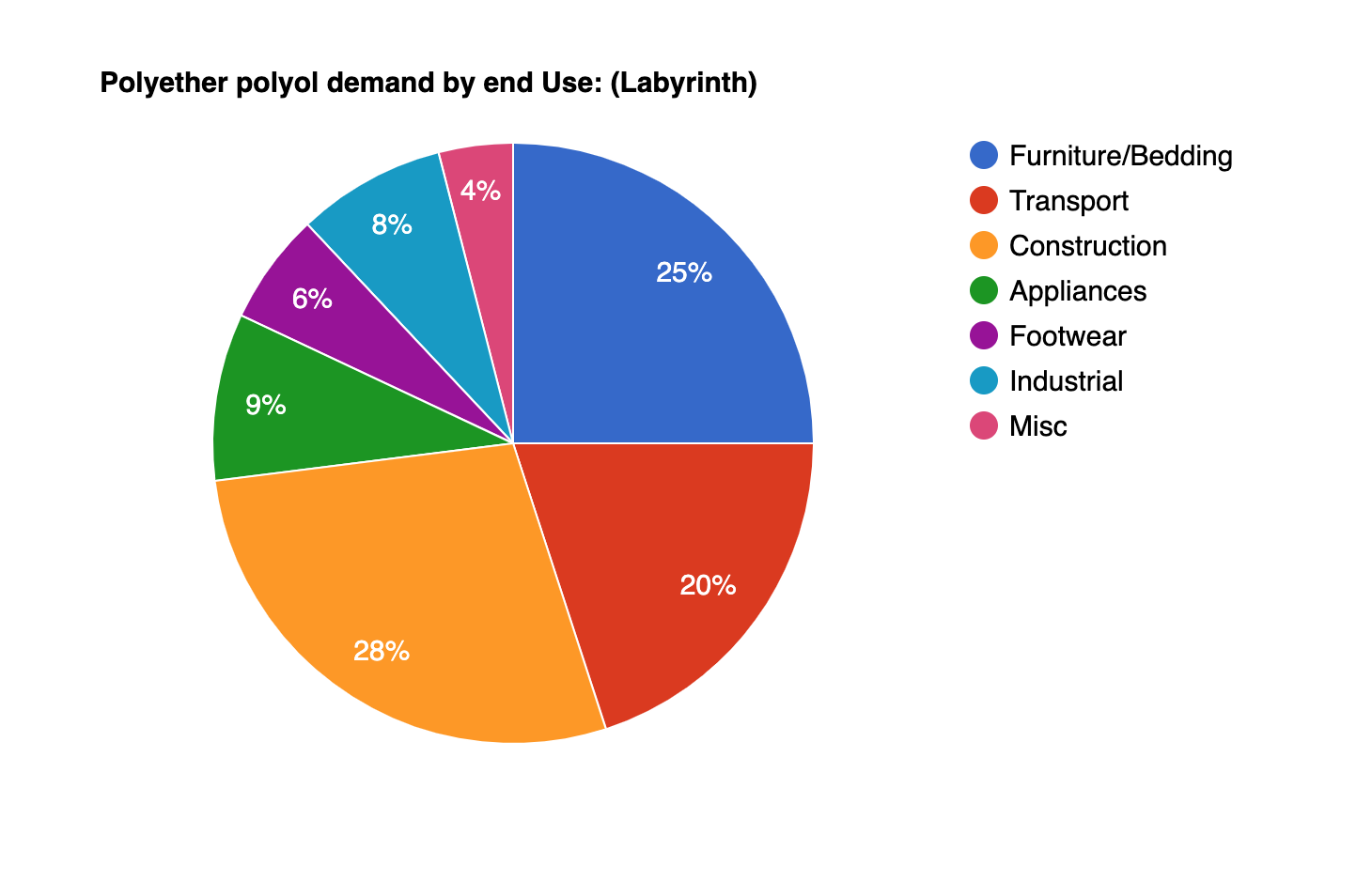 Austin told the meeting that Italian foamers seem to have hit bottom. ‘They are now producing more, and are refocusing their efforts on producing higher value, premium products for export markets,’ she said. ‘Italian firms have increased their production of visco, and it’s currently about 10% of production in Italy.’

Meanwhile, in Spain and Portugal, markets have been recovering because of the growth of tourism at the expense of places like Turkey, Egypt and Tunisia. ‘Hotels are purchasing more mattresses and replacing mattresses with foam mattresses,’ she said. Spanish foam capacity will increase dramatically this year as a major producer opens.

‘Portugal is really on a roll. EU data shows strong economic growth. Foamers in Portugal are very busy supplying Europe and exporting to countries as far away as South America,’ she added.

Romania is benefiting from demand from Ikea, and Bulgaria is also increasing its production of mattresses, she said.

Production in Scandinavia grew by about 5%, and production in Lithuania will also continue to grow slightly over the next few years.

Austin added that Belarus is a potential growth market, particularly around Minsk, Brest and Grodno. There are large upholstery manufacturing facilities located close to or in those towns, she explained. A new foamer is reported to be starting up production here in the next year.

‘Ukraine is still struggling to recover to consume as much tonnage as it did in 2008 and there are several box foamers active now,’ Austin added. Demand is still small, but is growing and it may be that some of the box foam as may become continuous, she said.

Austin also took the opportunity to correct some data from last year. The number of firms in Turkey was higher than originally thought. ‘While I reported that Turkey made about 114 kT/year foam, I’d missed three that started up in the previous 18 months and the total is close to 130 kT/year,’ she said.

She continued that the top five firms in Turkey account for 70 to 75% of the market, and the remaining producers supply local furniture upholstery and mattress markets. ‘Smaller firms there have suffered the most in terms of TDI pricing and availability,’ she said.

Overall foam production in Turkey increased in total by more than 5%. This is despite ‘challenges of the Turkish lira, social stability, and inflation,’ Austin claimed. 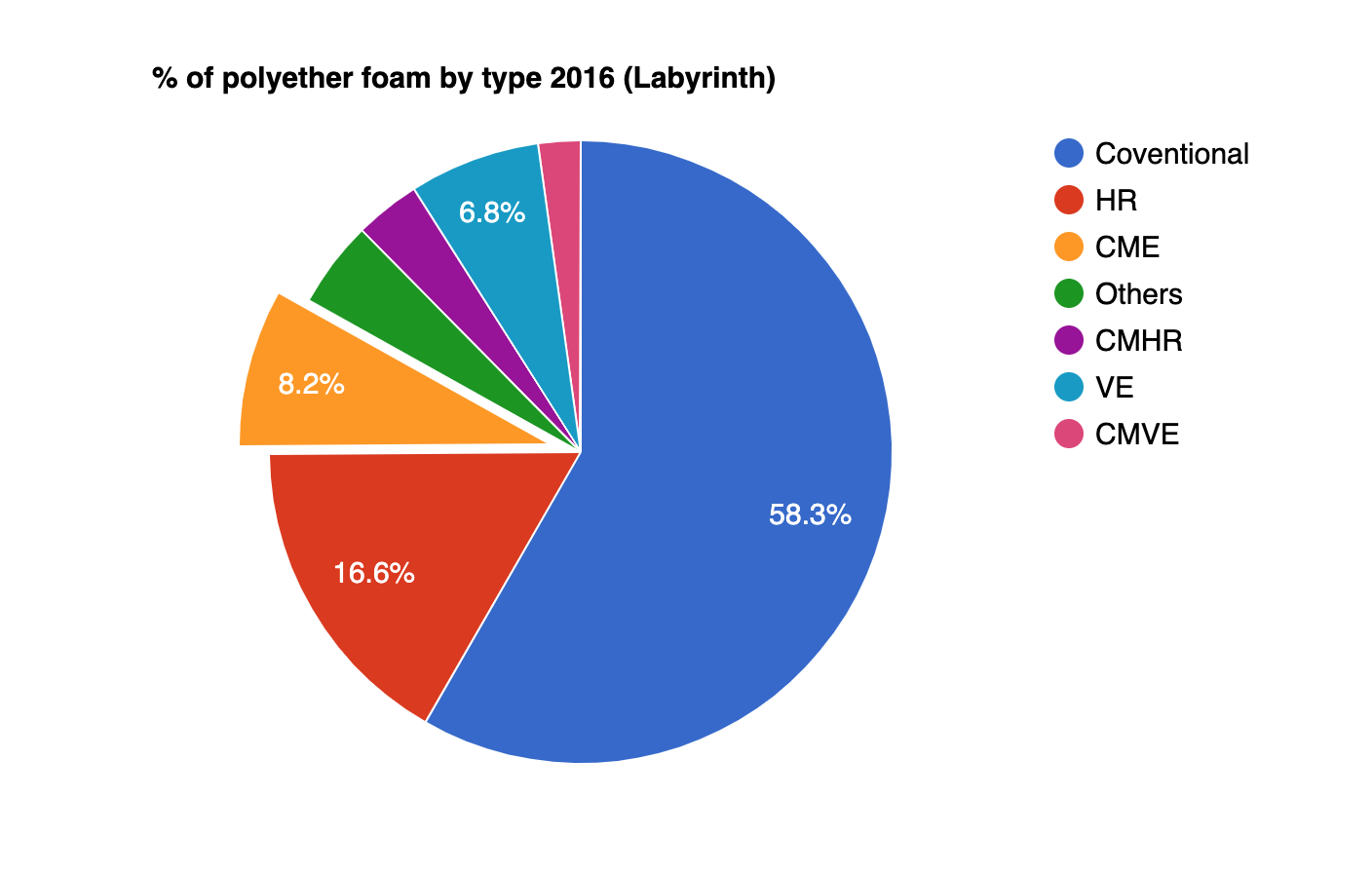 ‘The Russian market increased slightly. In the upholstered foam and mattress sectors there is some improvement in market sentiment people are looking to buy new furniture, and Russians are looking to export,’ she said.

Bed in a Box

Mattresses are one of the largest sectors for polyurethane, Austin added, and information from CSIL’s world mattress report showed that there is likely to have been a 12% increase in the number of mattresses produced in the European Union between 2012, when there were 40.6 m units produced, to an estimated 45.6 m in 2016. Foam mattresses account for about 34% of all those made in the EU 28+, Norway and Switzerland. That is 2% more than in 2015, she said.

As with flexible foam, Poland had a 41% increase in production of mattresses between 2015 and 2016, from 7.6 m to 10.7 m units, comfortably outstripping all the other significant players. In Russia, growth stalled; it declined slightly in Italy and Turkey; and it grew slightly in Germany, France and the UK.

The bright spot for polyurethane in the bedding sector is the growth of the bed-in-a-box phenomenon, and the associated growth in digital sales. In France, for example, quoting information from companies in the market, Austin said online sales now account for 10% of foam mattress sales in the country.

The automotive sector accounted for about 356 kT flexible moulded foam in 2016, out of a total of 1,717 kT foam produced in the EU 28, NO, CH, RUS, Eastern Europe and Turkey, according to Austin’s figures. And the volume of moulded seat production grew by 3%, along with the growth in the automotive sector in the region in 2016, she added. According to figures from LMC Automotive, the number of vehicles produced in Europe increased from 18.1 m in 2015 to 18.7 m in 2016, up 3.3%. The consultants forecast that the number of cars made in Europe in 2017 is likely to fall to 18.3m.

The polyurethane industry will face a number of challenges, Austin suggested. The drive to reduce weight by up to 5kg in some vehicles is leading to increasing use of foam/EPP composites. The greater convergence between VOC emission standards around the world will need to be managed by European producers, she said, and seats will have to get thinner as the need for lower, more aerodynamically efficient vehicles rises. At the same time, she said, there is a requirement to retain comfort.