Machinery survey 2015: Coming up for air

This might be the year that the polyurethane industry started to turn a corner leading the world back into growth. That’s quite a big claim to make about quite a small (but globally important) industry. But where the PU industry goes today so the world goes tomorrow.

The polyurethane industry is a lead indicator of economic performance, and one of the best leading indicators of any industrial segment is what his happening to the capital equipment sold into that industry.

This makes our machinery survey particularly interesting this year.

We see from the charts, tables and conversations in this feature that it is possible to tell what is happening to large parts of the world economy, where there is growth, or stagnation or decline.

The US has been one area of growth in the past year as Ross Willoughby of Con-Tec, said “2014 was a really busy year for us. We didn't expand we just produced more,” he said.”

His firm makes machinery for the North American market in the automotive Reaction Injection Moulding sector. A second area where the firm picked up work was in making small insulated panels for the heating, ventilation and air conditioning sector. “We have been doing work in the sector for a while,” he said, adding that the sector had picked up for his firm because of a move away from fibre glass. There has been “a switch from fibreglass to polyurethane” to insulate the panels. Typically installations are on commercial buildings in rooms almost like walk in coolers.

Willoughby’s business is based in the US and it does not market its machines overseas.

In Europe, Italy’s Tec Mac saw increased sales in the second half of this year, according to its general manager, Massimo Monchiero.

He said that while the first half of 2014 was quiet, the company had seen an increase of orders in the second half. “Tec Mac exports 95% of its production worldwide but we see Western European countries as being very flat,” he said in an interview at the end of 2014.

Monchiero said there had been more action in Russian and republics of the FSU markets. “They have been very active until few months ago however now every deal is being stopped by political uncertainty and the increase in the exchange rate for the rouble.”

He said that the company had found worldwide that customers are more and more price-oriented. “This penalises European quality products for the benefit of those coming from Far East countries,” added Monchiero.

“I suppose that thanks to the crisis some suppliers could leave while, unfortunately, while other suppliers have moved from their own fields of application to others, creating confusion in the market.

“Tec Mac is very sensitive to any development in the market and this helps us in being always on the wave with all our equipment updated to the new technologies.

“That is especially true for the blowing agents where Tec Mac was the first in the world in designing and producing a spray machine and a block foaming plant using pentane as a blowing agent,” he said.

Philip Hindson or AutoRIM said that 2014 had been a very strong year for the firm. “Last year was probably about the best for 10 years,” he said.

“In 2013 we took the decision to make polyurethane machinery in the UK. In 2014 we sold 8 machines mostly to the off-shore industry for pipe jointing. Quality is key,” he said. Machines must operate without a problem for three or four weeks producing joints on a two-or three-minute cycle. “This market sector is so demanding that we have to be sure that it will work that reliably,” he said.

“We managed to make a niche for ourselves,” he said. The firm has also won import business into northern Europe and Scandinavia, Hindson added.`

Another factor that Hindson attributes his firm’s success in 2014 is the growth in quick-build housing. These use panels which are “quickly assembled on site into buildings with almost passive house levels of insulation.  We've got governments to thank for that growth,” he said.

Rick Hungerford, of ESCO Edge-Sweets said that 2014 was a good year for his firm. ESCO won a “government contract worth over $1m. The firm’s PM3 machine, which was “introduced a couple of years ago started gaining traction,” he said.

2015 promises to be a “bigger year for us with new products,” Hungerford said. His firm is working with a number of clients to produce a low pressure machine that can handle highly-filled, reinforced polyurethane systems that are used in structural PU components for buildings.

Cutting machinery maker Fecken-Kirfel saw development of the PU market in 2014 and is confident for growth in 2015.

Axel Wynands, general manager at the firm, spoke of a growing stability in the polyurethane market at the close of 2013.

In 2014 he said: “The PU market developed very well and was more stable than it was before. We recognise steady investments from this sector and we are very positive for the future."

Wynands said the company’s T 6 cutting machine has been accepted very well by the market so far. “We received a very positive feedback especially from customers processing and cutting very soft foams or visco-elastic foams in cold conditions.”

In 2014 we did very well in the panel and refrigeration segments, thank also to CEDEPA, our sandwich panel R&D centre . CEDEPA helped SAIP to exports, “Around 80% of our sales are outside of Europe. Important markets for us in 2014 were Russia, Middle East, North Africa,” said Walter Pozzi, SAIP president. In spite of a good forecast, the Far East in 2014 was “not as successful as expected,” he said.

Besides this, in 2014, his firm “finished several big projects for machines for processing multi-component polyurethane hot-cast elastomers based on MDI and TDI for customers in the Ukraine, Russia and Poland.”

"It's important that the sales geography of OSV equipment rather changed," he said. "It decreased in Russia but, at the same time, it increased in eastern and western European countries." An example of this is the rigid panel lines the company delivered to Serbia in 2014, which we reported here.

Kuznetsov also said that his company’s sales had risen within the local Ukrainian market, “despite of the difficult political and economic situation in our country,” he added.

“In 2015 we will proceed with new developments in the field of mixing and metering polymeric materials, upgrade across the range of OSV equipment and expand our sales network.

“Particularly, we plan to find new distributors for the territories of East and West Europe, as well as in South East Asian countries. 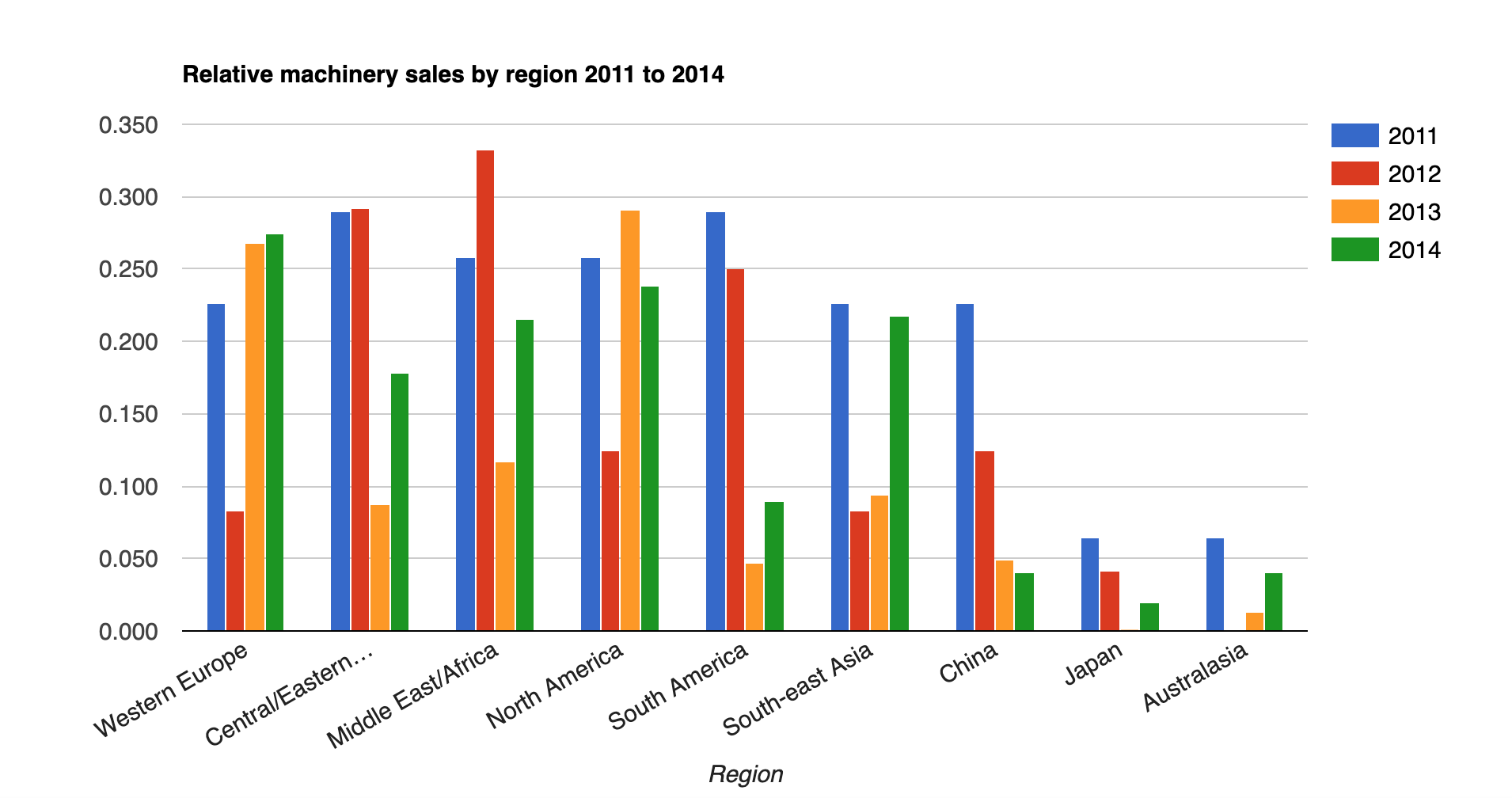 “Some steps has been already made in November 2014 when we established new technical support department at our branch in Lithuania. The main tasks of our new division are technical support and commissioning of new OSV equipment for our customers located in EU countries,” Kuznetsov added.

“Business in 2014 was good” said Eraldo Grecco, commercial director at OMS Impianti.”Order acquisition was below our expected level,” he added, “but turnover was the same, we took fewer, bigger orders he said.

One deal the company clinched in 2014 was inaugurated in December by the PirroGroup based in Saratov, Russia. A continuous line to make sandwich panels flexible faces was supplied by OMS.

PirroGroup makes polyisocyanurate panels with a soft linings the company has capacity to make over 10 million m2/year.

The whole plant is working completely in automatic cycle and it is controlled by a series of electric control panels based on industrial PLC Siemens S7 series and pertinent interface operator panels.

Greco said that 2015 has started well for the firm with lines sold to Indonesia and a small technical line delivered to Japan.

On the face of it the global polyurethane machinery market is more optimistic than at any time since 2011, according to the UTImcIndex which is currently at 4.9 for 2015. This is the second consecutive year of growth since the index hit its post-financial-crisis low of 4.1 in 2012.

That low was possibly caused in reaction to the withdrawal of post crisis stimuli.

In 2015, 60 named individuals at polyurethane machinery manufacturing companies around the world were asked to participate in our annual machinery survey by email.

The number of sales notified by respondents to our survey was 559 units in 2014. The number rises to 785 if sales of Baumer and Fecken-Kirfel are included.

Geographically, the stand out growth area in 2014 was in the Middle East/Africa region, according to the reported numbers. This is despite a civil war in Syria, and the collapse of civil society in countries such as Libya. These difficulties are offset by growing sales to a number of other countries in the region, according to respondents.

This region has performed at a consistent level for the past two years. South America is another area that people see as growing quickly.

Respondents’ views of Europe and South-East are tied. The perception of China as an engine of growth for the respondents has fallen for the third consecutive year.

Chart 2 shows the level of sales by region and helps to give some context for the numbers in Chart 1.

Western Europe accounted for the highest number of sales in 2014, according to respondents, followed by North America, South East Asia and the Middle East.

Western Europe has seen two years of consecutive machinery demand growth, according to the respondents. The biggest leap in new machinery installations between 2013 and 2014, according to the respondents was in South East Asia, followed by the Middle East/Africa. There was also a healthy leap in sales to the Central/Eastern Europe region. South America saw an increase in sales between 2013 and 2014, according to respondents, but this was to a much lower level than the boom in sales in 2011 and 2012, which were between 2.5 and 3 times higher than the reported figure for 2014. 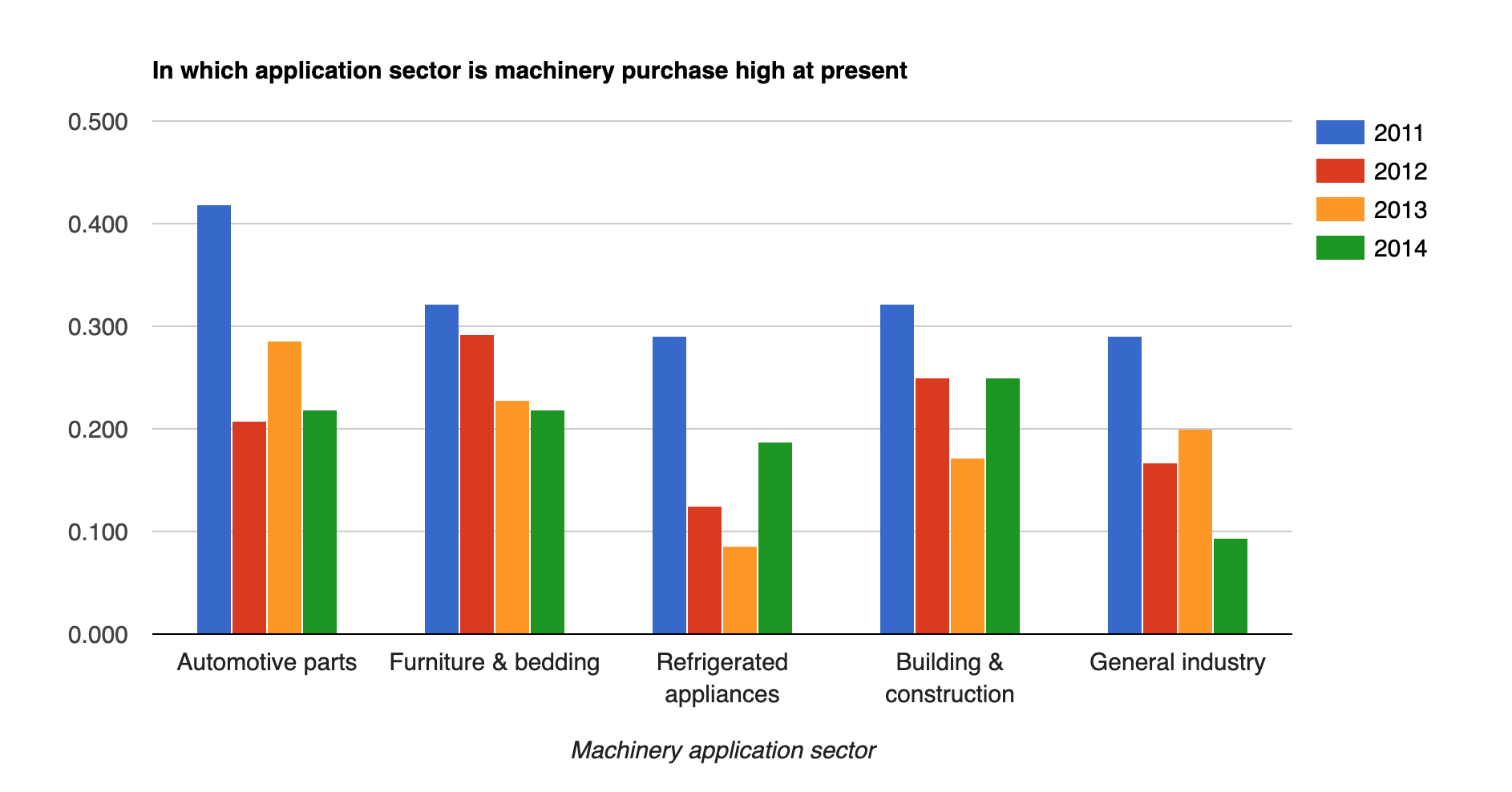 Machinery sales to Japan restarted in 2014, according to the respondents. Sales into Japan declined in 2011 and 2012. They ground to a halt, according to respondents in 2013. Sales to Australasia grew for the second consecutive year in 2014, after bottoming in 2012 albeit from a low base.

According to respondents machinery sales into China have fallen every year for the past four years. The biggest drops, of around 45% on the reported numbers was between 2011 and 2012 and a further 60% between 2012 and 2013, the drop between 2013 and 2014 was 18% and the situation may be on its way to stabilising.

In terms of application areas, Chart 3, the biggest demand for PU equipment is in the building and construction sector, according to respondents. This sector is followed by automotive, furniture and bedding, refrigerated appliances and general industry.

There are two drivers for this growth. Firstly, governments are imposing increasingly strict building codes that impose levels of insulation which can often only be met by panels made with polyurethane foam insulation. This has been seen in a number of previous features including most recently, subscribers have been able to see the effects of this in our recent articles on Korea, where companies such as Youngbo have benefited.

Insulated panels are finding use in pre-fabricated or easy-assemble modular housing systems in the developing world.

The greatest relative increase in respondents suggesting that sales are doing well came in the refrigerated appliance sector. This is driven by increasing penetration into growing middle class homes in the developing world. It is also being driven by increasingly middle class life-styles where cooking from fresh is too time consuming in time-pressured households. Reheating frozen or chilled foods is likely a growing trend in regions that are becoming wealthier. Such a trend leads to a greater need for chilled distribution chains to support this life-style change.