The tightness in the global isocyanates markets has continued unabated for much of the year so far, and there seems little relief on the horizon, at least not until the end of the year.

Both the MDI and TDI markets have been plagued by a series of planned and unplanned outages, as well as production disruptions, which have significantly tightened the global landscape and resulted in significant price increases globally. 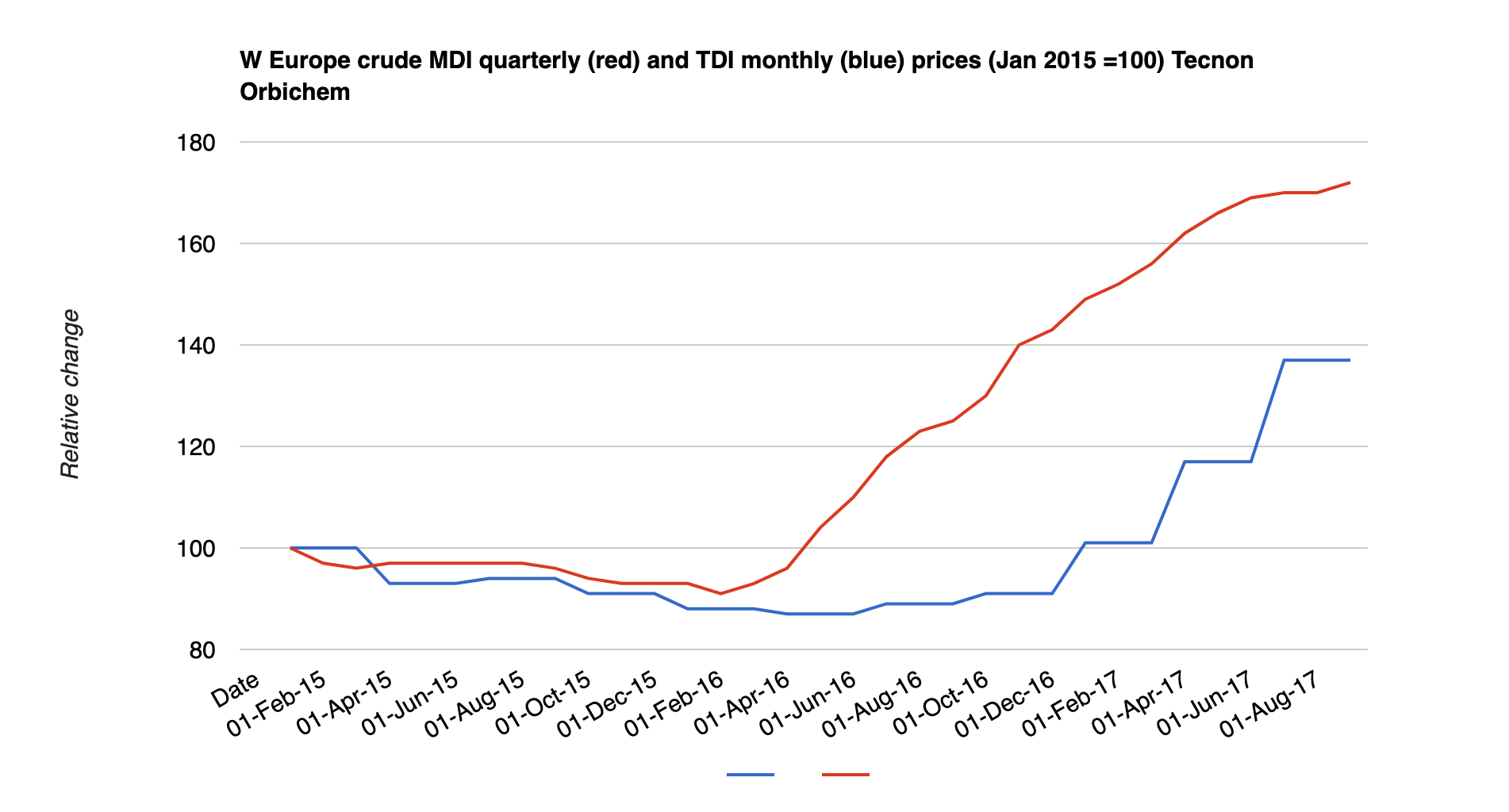 Certainly, what has caught most market players off-guard is the length and severity of the supply tightness. Prices have remained high enough for long enough that some downstream consumers are considering alternative technologies and product substitution, away from polyurethanes, to meet their end needs. The growing concern across the industry now is that when supply does eventually return to normal levels, will demand return along with it?

The MDI market has suffered from a string of unplanned outages, in addition to scheduled downtime, which has resulted in tight supply globally.

Earlier in the year, BASF and Covestro experienced production problems at their MDI units in China. The units are currently up and running, but BASF was said to have had another production issue at the end of June.

In Europe, Covestro declared force majeure on production out of its plant in Brunsbuttel, Germany in April, while in May, Huntsman experienced technical issues when restarting its units in Rozenburg, the Netherlands. In the US, BASF declared force majeure at its unit in Louisiana following flooding on the Mississippi River in June.

As the summer progressed, in August, Hurricane Harvey tore through the US Gulf Coast. This forced many petrochemical plants to shut down, resulting in two producers declaring force majeure on MDI. In addition, production problems in Asia have tightened supply there.

As a result, there has been little opportunity to replenish the inventories that have been running depleted for much of the year so far. Hence, prices have continually increased in response to the persistent tight market conditions.

In the TDI market, the situation is not as critical as it has been for MDI, but global supply remains tight.

Prices in China had been on a downward trend as demand has been weak due to the high prices. But this was a passing trend and prices began spiking again in July/August on supply tightness. While they have started to stabilise around the time of writing, this shows just how precarious the supply situation remains.

Both MDI and TDI supply is expected to remain tight for the balance of the year, with price increases still likely, despite significant increases already this year.

The high prices have been sustained for much longer than market players had anticipated and it has reached the point that some downstream consumers are contemplating changes to technology and/or the designs of products which currently speicify polyurethane.

This appears to already be happening in the TDI market, where bedding producers have been reducing the density and quality of the foam used in mattresses.

In the MDI market, the switch is not as easy, but at current price levels, alternative materials, such as mineral wool and XPS, are becoming competitive, making these alternative options much more attractive. Whilst MDI substitution still seems a way off, downstream consumers argue that the market is being pushed ever closer to that point.

Both buyers and sellers seem acutely aware that breaching a certain price threshold could threaten future demand growth. However, producers say they are committed to supporting their downstream markets, and some are even looking at more investment in the future. Overall, market players remain quietly optimistic that supply will return to a more balanced position – it is just a question of when.

In the polyether polyol market, prices in the US and Europe have started to rise after some stability over the past couple of months. Producers in the US have announced 7-8 c/lb increases for October in anticipation of higher propylene prices. Propylene prices there are likely to rise after capacity was shut in the wake of Hurricane Harvey. In Europe, tight supply, production disruptions and overall bullishness in crude/naphtha values pushed up the cost of propylene in September and translated into higher prices for polyols in October.

However, generally, despite some tightness in availability, poyol supply overall is mostly balanced and demand has been steady. In China, polyether polyol prices have been fluctuating with those of the key feedstock propylene oxide. The PO price has spiked at times over the year because of supply shortages; however, demand has been soft.

In the meantime, isocyanate prices look set to remain high for much of the rest of this year.

Market players hope that once supply begins to normalise, prices will begin to come down, but many market participants agree that this is likely to be a gradual rather than immediate process.