Key figures in Poland’s flexible foam industry suggest the country’s output is in the region of 200kT/year – which is double the estimated annual yield in the previous decade. Jane Denny reports.

Growth in Poland’s furniture industry in recent years has led to an increase in demand for foam with the knock-on effect of investment in foaming technology and process. As Eurofoam ceo Alexander Mikolasek says: “It is true [the Polish foam market] is not very transparent but what is obvious is that over the last 10 years it has been, and continues to be, a very dynamic market. For sure it is the most dynamic market in Europe.”

Total sales revenue for key foamers in the country – Dendro, Organika, Ciech and Vitafoam and a few smaller players – was close to EUR 1bn in 2014. Adding materials producer, PCC Rokita’s sales into the pot takes that figure to well over that amount. Suffice to say, Poland’s foam industry is booming.

Given the continued growth of Poland’s economy and furniture demand, companies along the furniture supply chain have been and are still investing millions of Euros in expansion, consolidation, diversifying product offering as well as improving their R&D capabilities.

Polish national daily newspaper Rzeczpospolita publishes a report called the 2000 List of the Republic. It includes information, which the companies provide, on Poland’s largest companies.

Among other details, the report shows that Vita Polymers invested over PLN 254m in its Polish subsidiary during 2014. The same year, Ciech spent over PLN 202,000 while PCC Rokita - which is about to invest EUR 10m in expansion plans - spent over PLN 161m.

The polish flexible polyurethane sector is made up of a number of private companies which dominate the sector.

While they are privately held, Poland, like other civilised countries insists that they produce annual accounts which it registers at its National Court of Registry. It is possible to locate company information at www.krs-online.pl. This is where the following information was gathered.

The largest company in 2014, the most recent year for which figures are available, in terms of sales was Dendro with just under PLN 400m in sales, followed by Vita Polymers Poland with PLN 298m and Ciech with PLN 232m. Organika, which was number two in 2013 had sales of PLN 202m in 2014. Other foamers, Doser and CIS account for around PLN 60m between them, as can been seen from the graph.

Between 2010 and 2014 the Polish flexible foam industry was enjoying growing sales, and growing margins as is shown in the graph of national sales and margins.

“Over the last 10 years [Poland] has been, and continues to be, a very dynamic market”

The filings show that the greatest increase in sales was between 2010 and 2011, when there was PLN 194m increase with Ciech generating sales of PLN 123m. 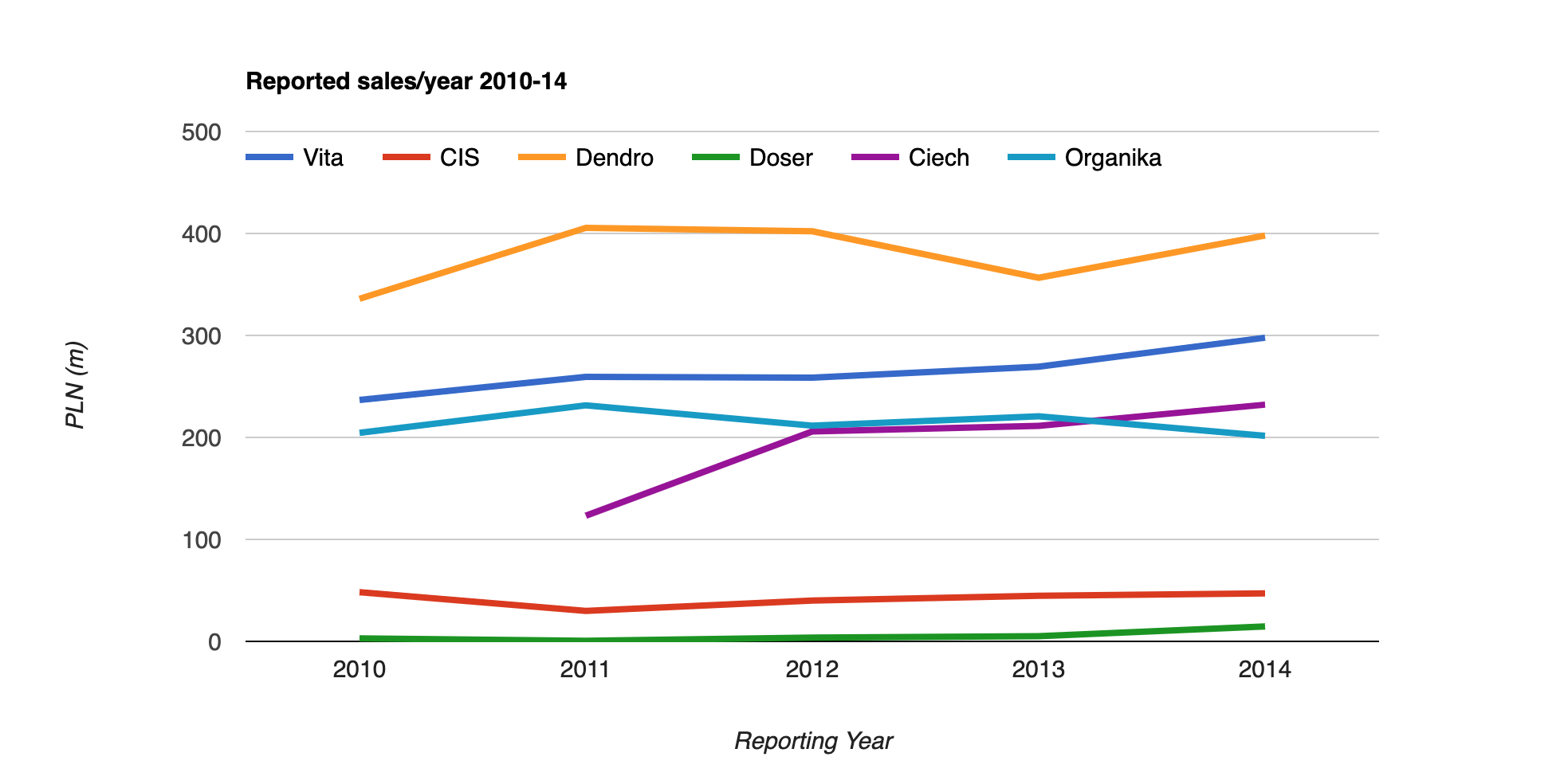 It has not been steady progress though, the market for Polish flexible polyurethane foam shrank between 2012 and 2013 by PLN 234m before rebounding in 2013-2014.

The country’s furniture output shows no sign of waning. Italian industry research firm the Centre for Industrial Studies (CSIL) estimated that Poland produced in excess of EUR 9.8bn ($) worth of furniture in 2015 – the figure is up over 45% on the EUR 6.7bn it produced in 2010. Around one quarter of that amount is soft furniture such as sofas.

Add Poland’s mattress production to that figure and the industry produced, according to CSIL, another EUR 621m worth of goods. The mattress industry has grown at the same 40% plus rate since 2010, its research suggests.

The number of furniture and mattress manufacturers in Poland is also growing, according to CSIL. Back in 2010, there were 94 companies producing mattresses in the country. By 2013 – the last year for which figures were available – this figure had grown to 115 companies manufacturing mattresses.

In addition to that, there were, according to CSIL, almost 15,000 furniture manufacturing companies within Poland in 2013. Well over 150,000 workers were engaged in the furniture and mattress industry in 2013, CSIL added.

Sara Colautti is a senior partner and head of the furniture research at Milan-based CSIL.

She said: “Poland is one of the biggest and most competitive manufacturer in Europe.”

According to the company’s research, Polish furniture production is “very fast growing particularly if benchmarked with the EU scenario.”

Polish production concentrates in two main segments: upholstery production and ready to assemble furniture. Both markets have grown over recent years and “are set to continue their growth path in the coming years,” said CSIL.

Growth is mainly driven by exports, with the German market absorbing around 40% of Polish furniture output. “But Polish furniture producers are recently proving able to gain from the recovery in other EU markets, the UK and also France and Spain,” CSIL added.

CSIL puts Poland in third place internationally for upholstered furniture behind China and the US, but first in Europe. “Moreover Poland has been the best performer among the European countries during the last five years. Also for upholstered furniture Poland is a very export oriented country. About 80% of upholstery production is exported to Western Europe - in particular Germany, France and Netherlands.”

“This growth is accompanied with some concerns,” said CSIL. It continued: “One is the shortage of skilled labour force. The other is the need to improve production efficiency through automation and lean production, as well as improving logistics and distribution to meet demand across Europe.

“Many companies told CSIL they are in the process of investing large amount of money in this field,” CSIL added.

The priorities for Polish producers seems to be about “containing costs, differentiating export destinations and fast delivery - fragmented in small and differentiated deliveries.”

Middle and middle to high end producers are trying “to increase the value-added of their products to sell capacity but also brands.”

Lastly, CSIL found that companies are producing items with a higher average value. “This is mainly due to an improvement in the quality of the products. Companies are investing in innovative materials and upgrading productive technology in order to remain competitive and offer higher valued products.

“Moreover the industry is affected by increases in the cost of labour and by the consequences of regulations for example end product flammability and environmental aspects around production. These are becoming more stringent and that has an effect on the price of the product.”

Mexico looks to the north

From Norway to the world