Polyurethane demand is good but not stratospheric

“Growth will continue in all regions, but I think stratospheric growth is unreasonable to expect,” Robert Outram, consultant with IAL, told delegates at the UTECH Europe plenary session.

He continued: “We are possibly seeing double-digit growth in Asia,” but he warned even the emerging markets are affected by the Eurozone and the US recession. This means that growth figures of 18 to 20% are not going to happen, Growth will continue at a few percentage points above GDP.

He continued: “The market fundamentals are good, there is a lot of growth left when per capita consumption rates are considered. At the moment key growth areas are spray foam, viscoelastic foam, the refrigeration and cold chain, thermal insulation and slabstock as well are seeing quite good growth there too,” he said.

The global polyurethane industry produced around 21.7m tonne polyurethane in 2014. Asia, with over 11m tonne, was the largest producer, while China accounts for “virtually all” Asian production, Outram said.

China is an “enormous production site,” he said “dwarfing” Western Europe and the US. Eastern Europe is growing “quite nicely, and North America is also coming back online after a slump,” Outram added.

Flexible foam production was around 28% of the global total, 6% ahead of rigid and elastomer applications, which each accounted for around 22%, he told delegates. However, he warned that “these proportions vary enormously depending on which region you are in. Rigid foam is much more prevalent in Asia, elastomers such, as elastane is produced in China as well.”

“We are forecasting growth to 2018”, he told delegates, which is his firm’s furthest horizon for forecasting. This prediction is based on a number of factors used by the economic modelling team in the BRG Group, of which IAL is part. “We have done a lot of modelling of economic indicators such as car production statistics and housing production to develop a model. This is combined with the hundreds and hundreds of interviews we have done with the industry to derive growth rates the different sectors.

Across the world, IAL expects to see 7.2% growth in PU consumption. 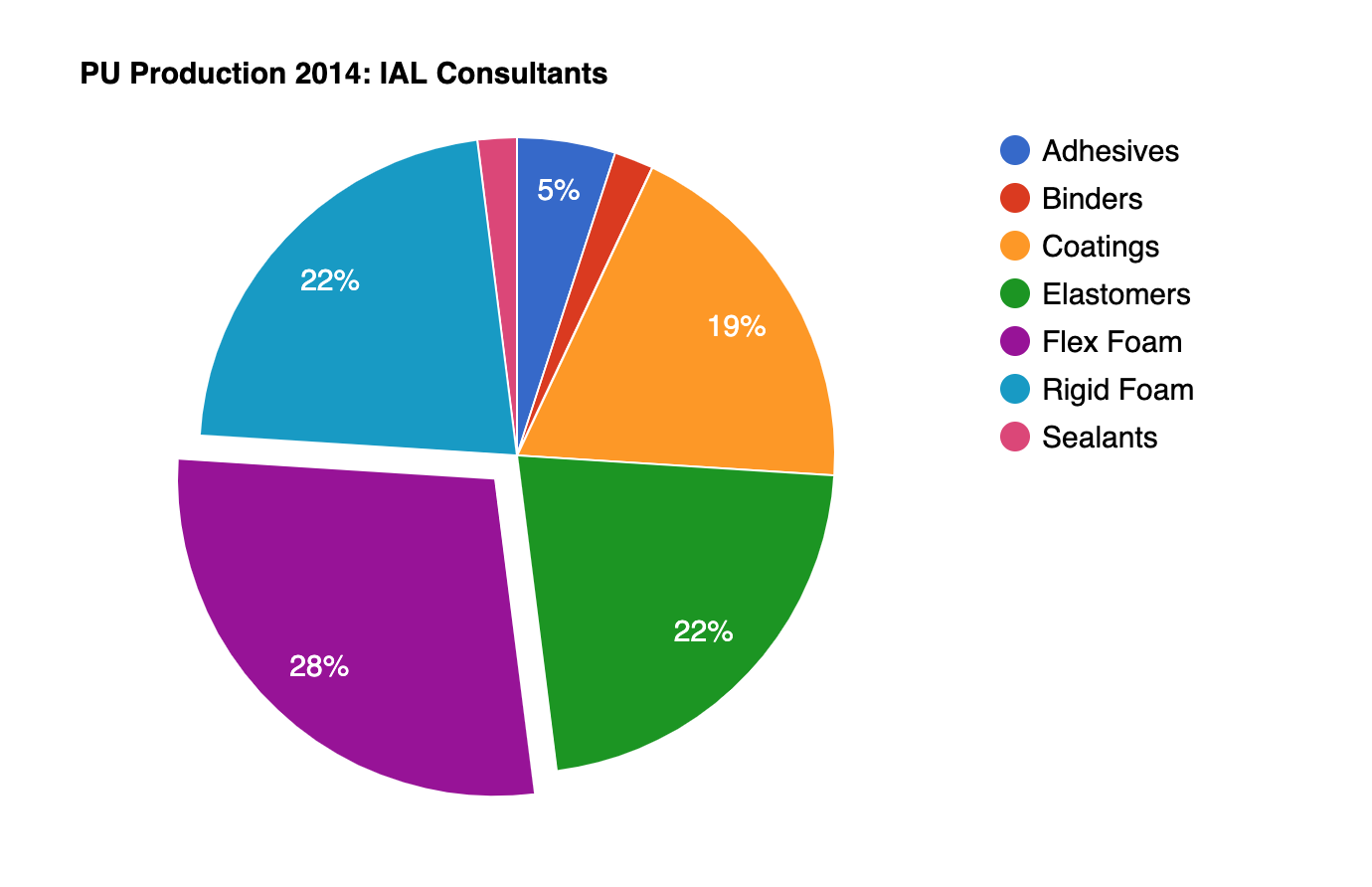 Hotspots are likely to be Eastern Europe, China and Indonesia. “North America is quite slow to pick up,” he added.

“Across product groups, rigid foam, driven by tougher insulation demands in new and refurbished housing, is one of the highlights, specialties, adhesives and sealants and elastomers are also tipped for growth,” he said.

“In terms of ultimate growth, it is also quite hard to predict how big this industry can become, will it stagnate?” he asked.

“There is still a lot of growth left in the polyurethane industry,” Outram told delegates.

The demand for polyurethane will grow more than GDP for a several reasons he said: “There is a lot of substitution of PU products for other products. The reasons for that include energy costs, despite the recent falls in oil, there is a lot of impetus in building houses with high energy values; government construction projects to try and bump-start economies; social housing; and, cold chain improvements.

“There is general population growth, rebuilding, and general increase in wealth in the developing world which enables people to buy sofas, beds and refrigerators. There are also financial opportunities. All of these things are driving the consumption of goods,” he said.

There are threats to this growth, he warned. These include: “The economic crisis; Instability in the Middle East, which is detracting from growth; fire regulations can be a concern. There is a threat of recession hanging over us again, and even things like Ebola.

“The industry is also facing price pressures,” he warned, adding, ”during the recession prices were reduced. It’s very, very hard, once you start reducing prices, to get this price back up.”

A further threat, he suggested, comes from client industries such as automotive. Here, trends to reduce cost and light-weight production could slow the materials consumption growth .There is also some inter-material competition within polyurethanes themselves, he added. “We are aware of trends seeing a reduction in TDI and replacing it with MDI in flexible foam and increasingly flame retardancy.

“Spray foam is a big growth area along with viscoelastic foam as is polyurea,” he said.

Outram picked out eastern and western Europe in his market forecast. “There is potential for growth in the spray foam industry,” he said, although he added, “the market depends on the building industry.

Outram said: “Euro construct building statistics show there’s been a good pickup in construction industry. The US construction market, for example, is seeing good improvement to 2018. There is good investment in Brazil, Russia. It is quite stagnant in France and Germany. Even the Spanish market, which had a horrible tumble, is looking slightly brighter.”

“There is considerable building work in Asia and forecasts by BRG Building Solutions and Euroconstruct shows quite huge growth in an area which dwarfs other regions at the moment. But in all other areas we have expanded. There’s been good growth in North America, with the housing market recovery,” he said.

Spray foam growth is being driven by the need to retrofit buildings to bring their insulation up to modern standards. Outram singled out Russia as an area of real opportunities “where there are big, Communist-era buildings that can be retrofitted,” he said.

There is “intense competition within Eastern Europe, where they prefer traditional materials and panels,” Outram said.

In China, there was an interim ban some fires which had some impact on construction applications, he said.

The Western Europe the market “just isn’t as developed as the North American market. The biggest markets are in Benelux and France, and spray foam tends to be used in flooring applications. There is a preference in Germany for panels.

“The forecast is that China will overtake the US in spray foam volumes. There is competition from other materials of course, natural materials, the fire rating is the major thing, and particularly within these Asian markets.  But the outlook is positive,” he told delegates.