Indonesia, Vietnam and Thailand could all benefit from rising costs of production in China, Robert Outram of IAL Consultants told delegates at the ICIS polyurethane Chain Conference in Singapore in October.

It is hard to get a good grip on what is happening in China, the dominant country in Asia, because it is hard to reconcile the country’s official statistics with the experience of companies operating on the ground in the country, Rob Outram, senior analyst at IAL, told delegates at the ICIS event in Singapore in October.

“Companies are just not corroborating the kind of growth rates or market sizes that we are seeing from the official figures,” Outram said. There is plenty of room for the PU industry to grow in Asia, he added. Comparing countries like Vietnam, Indonesia and China with countries like Germany, France and the rest of Europe, per capita consumption.

He said: “People talk very enthusiastically about growth in Asia and if you’re a big powerhouse like it is possible to capitalise on growth. A lot smaller companies are finding it very, very difficult to get that kind of growth. CEOs spend a lot of time explaining why they are not getting the growth of 15 to 18% or 20% growth that the numbers might suggest.”

“I think there needs to be a little bit of caution here,” Outram added.

There are a number of good reasons why it is hard to achieve headline growth levels said Outram, citing “multinationals investing very heavily in emerging markets; local multinationals are becoming very, very aggressive, medium-sized firms are going further afield and deeper into these growth nations and you should never underestimate small local players in these markets.”

That competition has to be seen in an environment where operational costs are rising and pricing instability is common. “It can be done successfully you can get good growth, but the stratospheric numbers that we are seeing bandied  around in many presentations concern me,” he said.

Outram warned that the success of companies in Aisa often depends on the economic strength of the rest of the world. Looking at China and South and East Asia, he suggested that because of exports “60% of GDP comes from developed countries… you really have to be looking at what’s happening in the US and Europe because most exports go to those regions.”

While this is true now it may not always be the case, population growth in Asia will make it an increasingly important market for domestic polyurethane proudcers. “There’s not much population growth in the developed world, it seems to be coming from Africa, the Middle East and Asia,” Outram said. This leads to a “fundamental need” for more PU in the future, he added.

Asia also benefits because there is hardly any debt.

Looking across the region.

Figures from the IMF show that while China is way ahead of the pack in terms of GDP but India and Indonesia are growing well too.

The figures show that GDP growth in China is about 9.2% so the PU industry is growing at about 11% growth for China. Although Outram warned that the “numbers are pretty high.”

There is also potential for growth in the Philippines and Vietnam, but “the absolute shining light is going to be Indonesia,” Outram said.

At the moment, China is becoming less attractive to investors. He gave shoe manufacturing as example. This is partly because wages in China having been going up. On the east coast of China where the manufacturing is located can be almost doubled in five years from RMB900/month to RMB1900. The Chinese government is trying to mobilise these other low-cost areas by building infrastructure so allowing and improving access to the lower-pay, less developed west of the country.

Increasingly “Companies are looking at this thinking ‘it’s unsustainable’ and asking ‘where we can move production to?’”

There are 22bn pairs of shoes produced annually worldwide. Around 90% of them are made in Asia, around 64% is made in China. But there is a shift out of China to Vietnam, Indonesia, and ultimately India, said Outram.

The growth rate for shoe production in China is high, despite Reebok and Nike pulling out of the country. China still has 4.2% growth however  12% growth in Vietnam and 10% growth in Indonesia.

Indonesia buys its shoes from China and exports its production to South America and also to Europe. This caused a dip in revenue in 2008 when the global recession hit but after that it’s rebounded well and there’s been enormous growth. Indonesia is really taking off as a footwear manufacturer. 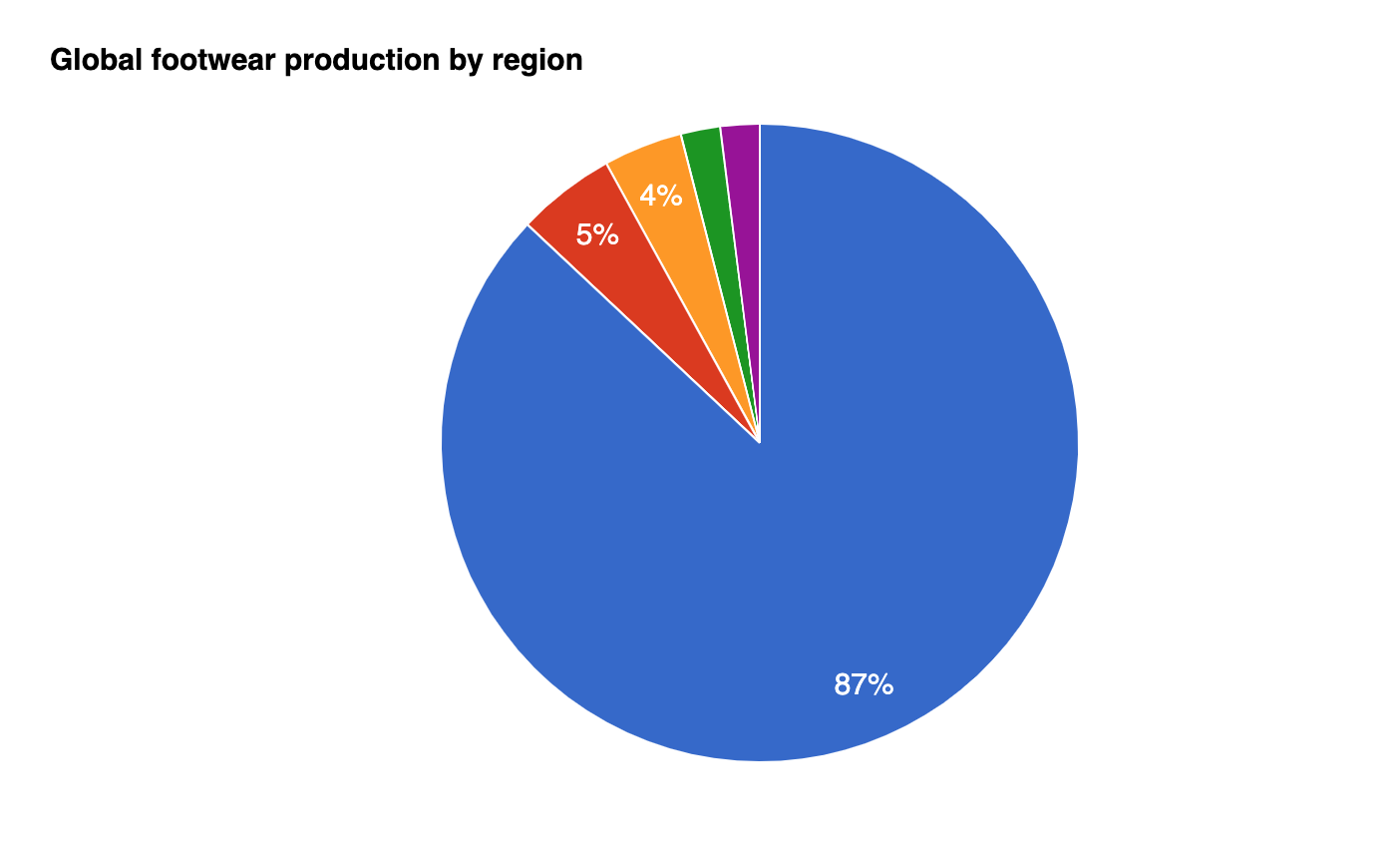 Indonesia’s growth as a footwear producing country is driven by political stability; its population of 250m, a large well-educated and skilled workforce; and a stable economy, said Outram. Indonesia is also benefiting from companies moving there to avoid EU anti-dumping legislation which affects China’s production.

There are many OEMs in Indonesia including domestic appliance makers such as Sharp, LG, and Samsung.

While it looks positive there are downsides to being a PU converter in Indonesia, he said. “Although logistics are generally better than other Asian countries, they are generally poor compared to the US or European countries.”

Relying on exports could also be a weakness, if Europe goes back into recession.

Vietnam is the third largest footwear export in the world and accounts 7% of the world’s footwear production. There are 230 footwear manufacturers registered with the local association in Vietnam and the government supports footwear growth.

Like Indonesia, the country exports to South America and also Europe tends to be an important trading partner. Nike and Reebok have shifted production to Vietnam. Other companies are rumoured to be moving to Vietnam.

The downside is that there is no raw material manufacturing in the country. Vietnam is mainly an elastomers market with 69% of polyurethane component production driven by synthetic leather and footwear.

There is scope for growth in refrigeration production in Indonesia and Vietnam. But Thailand “has really set out its stall as a refrigeration producer” said Outram. He added that production growth “will continue at around 9.7%.” This number considers all units produced and may include a large volume of fridges assembled in the country. There are opportunities for truly local production and for domestic supply of raw materials such as polyurethane. Thailand dominates this market.

China is seeing good growth across all areas of the cool chain and in refrigeration. I think there are massive opportunities for growth across Asia, particularly in India. There’s old movement of perishable food which needs refrigeration and cold storage. This is a big opportunity for the thermal insulation industry, Outram said.

“Furniture and bedding is being driven by urbanisation and the growing middle classes. We’re seeing a lot of upgrading within the refrigeration sector people are moving from having a small fridge freezer to the huge American fridges,” said Outram.