London — Elastomers account for 37% of the total materials demand for polyurethane materials in the Asia Pacific region, according to a recent report published by IAL Consultants.

Between 2016 and 2021, the flexible foam market in the region is expected to grow at 5.5% compound each year, the Consultants said. 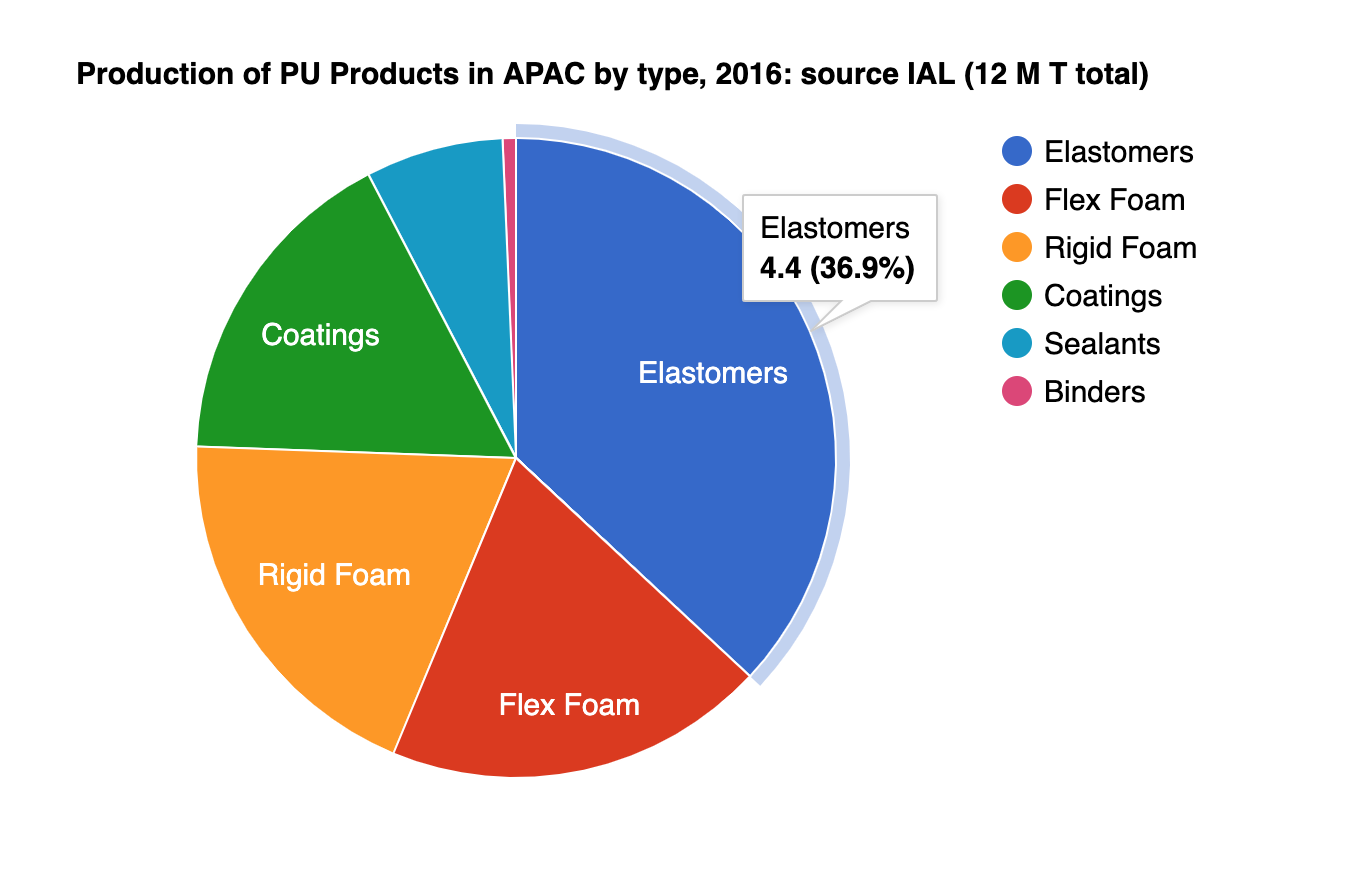 The Chinese market for example, has been hit by the collapse of demand for spray foam there and the slowdown in the construction sector. In India, the market is thriving with growth in the automotive, footwear and construction markets.

IAL said that approximately 2.8 MT of MDI and 873 kT of TDI we used polyurethane products in the Asia-Pacific region in 2016.

The firm says that China is becoming more self-reliant on MDI, with new plants coming on stream which have reduced the level of imports from Europe.

Historically, there has been a general shortage of MDI in the region, but this has changed thanks to increasing levels of production.

Recent investments in facilities owned by Covestro, BASF and Wanhua in China mean that there could be over capacity, with doubts about whether there will be adequate demand from downstream applications, IAL said. If that's the case, then IAL warned that "manufacturers will increasingly look to export markets to take up their excess supply."

In the TDI market, IAL said that the automotive industry has outperformed furniture production and provided the main impetus for flexible foam production and TDI consumption in the region. However, mattresses, upholstery and transport seats, are the main end of-use applications.

Overall the region represents opportunities for growth and TDI producers are expanding.

Several new facilities, or expanded facilities started at between 2014 and 2016 with more capacity expected from Yantai Juli and Cangzhou Dahua in 2017. These could lead to a risk of surplus capacity in the region, the consultants said.

The total Asia-Pacific production of polyurethane coatings was over 2 million tonnes in 2016, IAL said.

The main coating applications are in wood structures, furniture, construction and marine and automotive applications. East Asia is the main producer and consumer of PU coating is in the region.

Adhesives and sealants made of polyurethane are used for a wide range of applications in the region with around 813 kT produced in 2016.

The polyurethane adhesive and sealant market grew in 2016 because of increasing demand from a range of industrial sectors but mainly flexible packaging, construction automotive and footwear. Footwear and flexible packaging are the two largest end-use sectors, the consultants said.

Polyurethane elastomers see most demand from the footwear and textile industries in the Asia-Pacific region. Total production was over 4.4 million tonnes in 2016 making it by far the largest segment in Asia the consultants added.

The report: Polyurethane Chemicals and Products in Asia Pacific (APAC) 2017 is available from IAL Consultants priced at EUR 14,500, with individual sections available separately.