London -- Three quarters of UK respondents in a straw poll on the possibility of UK exit from the European Union (EU) felt that such a move would be bad for business. The poll was carried out by Urethanes Technology International magazine/UTECH-polyurethane.com over the weekend of 29 May 2015.

The poll was prompted by the recent general election in the UK, which returned a government committed to holding an in/out referendum on Britain’s membership of the EU by the end of 2017.

A total of 67% of  European respondents felt that if the UK were to leave the EU, or Brexit, it would damage business. 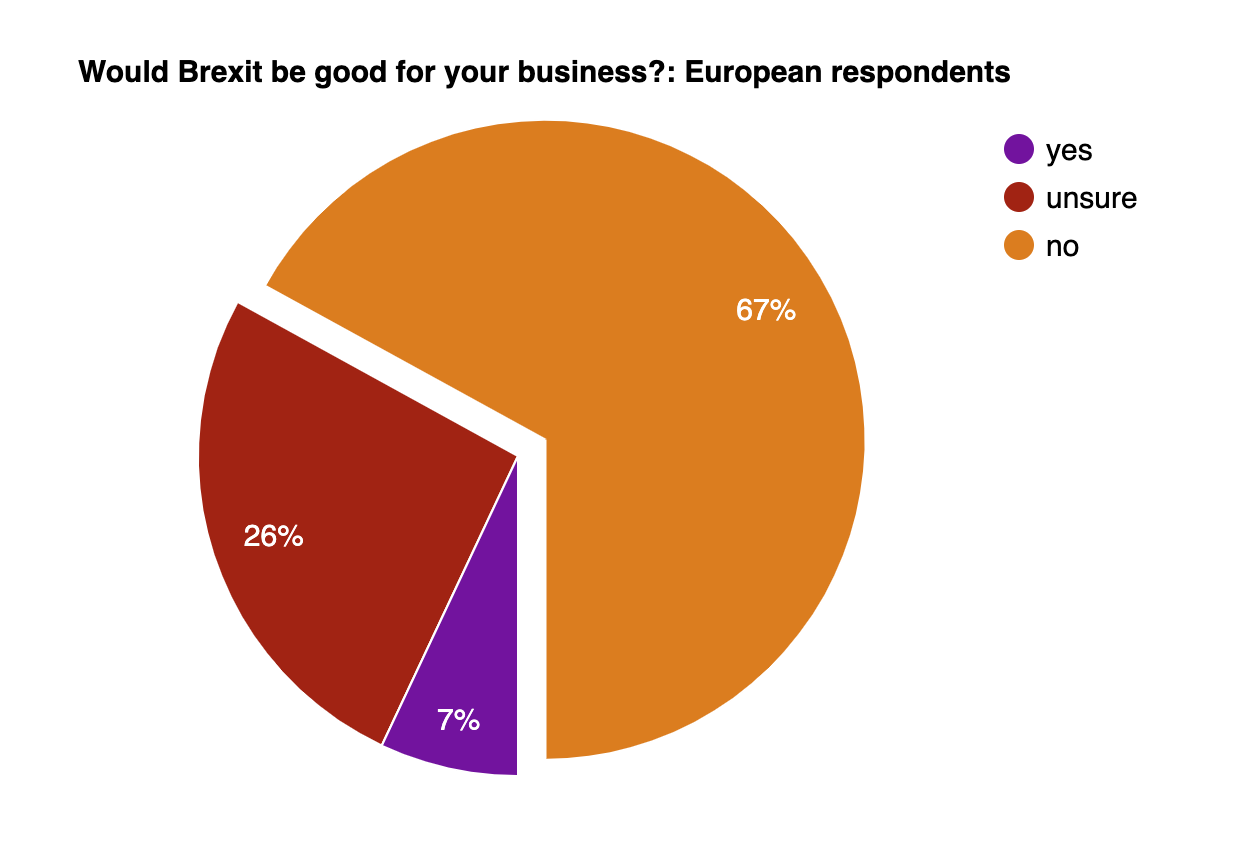 In response to the question,: Do you think that in the longterm it be good for your colleagues at operations if the UK were to vote to leave the EU? 81% of UK respondents said it would not be good for them, and 59% of respondents in the rest of the EU also said they believed an exit would be bad for their UK colleagues. About a quarter of UK or European the respondents were unsure.

A third of North American respondents felt that it would benefit their colleagues in the UK if it were to leave the EU.

Would a UK exit affect investment decisions? 56% of British respondents said they believed Brexit would be negative for investments in the UK. Only 6.25% of UK respondents believed that companies would be more likely to invest in the UK if it were to exit.

A total of 70% of non-British Europeans felt that companies would be less likely to invest in the UK were it to leave the EU.

North Americans were unsure if an exit would make companies more, or less likely, to invest in the UK - as were South American respondents.

Would companies relocate production if the UK left the EU? British respondents feel that PU companies would stay in the UK, with 56% answering no, 31.5% unsure and only 12.5% saying yes on the question. Non-British Europeans were more evenly split with 35% no, 34% unsure and 31% yes.

Respondents were allowed to leave comments anonymously, including:

“As I live and work in the UK I think it is very important to stay in the EU, the UK does not have Polyol and Isocyanate raw material manufacturing and has to source these from other member states within the EU. The UK does have a lot of polyurethane processing companies who rely on Europe for their raw materials but also for their end product sales.”

“It would be a big loss for the UK to leave the EU: The UK would become a second-rank country and ties with the US would probably loosen, as the US would prioritise the EU over the UK and Germany would become lonely in defending NEW countries. A no would trigger Scotland and Ireland to quit the UK, hence leaving England alone. It would be bad for business in general.”

“The UK must stay within the EU to achieve stability and growth, with benefits of being within outstripping any negatives by a considerable factor. The EU is far from perfect, with immigration needing very strong control but it’s better to fight for change from within, rather than become isolated. Many of my European colleagues within the international polyurethanes industry also want change - but change with a small ‘c’.”

“EU is heading for a car crash in terms of red tape and other blanket rules against innovation and business. It is better to exit the car before the crash.”

“Short term: Likely would have destabilising effect on Euro. This would not be good for global business or equity value of global corporations.”

“The UK has always acted differently: example the pound sterling I would say: let go, as they wish to take only advantage of the Europeans, rather than teaming up. You team-up for the better and the worse.”

“Membership fees and corporate red tape makes leaving the EU a good idea. I work for a German company and it makes little/no difference I think to our UK position.”

“I would prefer to see the UK remain an (important) part of the EU. Nevertheless, I sympathise with the criticisms raised by some of those which favour the exit. I think the reasons for some of the disappointment throughout the EU (not only the UK), is how quickly there was a change from an economic treaty to a political one. This leads to loss of decision capability by national parliaments and governments. This, in my opinion, should never have happened, until all countries (with no exception) voted by referendum such a move.”

“At the moment there is insufficient information available to business as to what any future relationship with Europe is likely to be, pending Cameron’s [David Cameron is the UK Prime Minister] attempted renegotiations. It remains to be seen exactly what, if anything, can be changed. There appears to be no final list of the changes being sought, and it is slightly surprising that the impression being given by Cameron is that if there is no change then the UK will vote to leave the European Community.”

“I agree we should renegotiate terms that have been allowed to wander under previous British governance. But we should not come out of the EU. The knock-on effect for our Japanese-owned automotive companies based in the UK and the strong possibility of them withdrawing from the UK would have a catastrophic effect on our automotive component sector and ultimately the assembly work force at the respective plants (Honda, Nissan and Toyota).”